Manchester Shock Newcastle to Advance in Trophy - BBL Round Up, Week 16 - Hoopsfix.com

Manchester Shock Newcastle to Advance in Trophy – BBL Round Up, Week 16 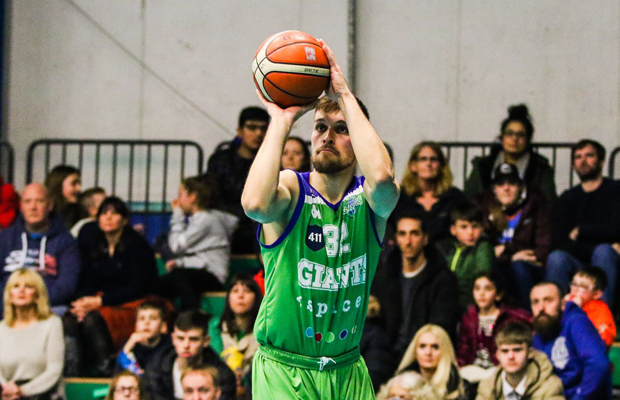 Another action packed 8 game weekend in the BBL saw us witness Manchester Giants be the first team to secure their spot in the BBL Trophy semi-final, while the London Lions move to 14-2 on the season to stay at the top spot.

Here is this week’s round up:

A close first half left Eagles fans believe they would see their team grab their first win in the new arena but it wasn’t to be as the Giants pulled away with it to end the third quarter with a 12 point lead over the home team. It was a first win over Newcastle for the Giants in 20 attempts since 2012 with the Eagles now 0-2 in their new arena. This impressive win over the Eagles saw Manchester reach a second Semi-Final of the season.

Vlatko Granic had a season-high 26 points for the Giants along with seven rebounds, while Clayton produced his usual double-double with 16 points and 17 boards. Torry Butler also double-doubled with 10 points and 10 rebounds with James Jones handing out nine assists in a real team effort.

Rahmon Fletcher dropped 23 points to be Newcastle’s leading scorer, with Kai Williams having 13 and Kyle Williams adding 10 to the scoreboard.

With the Flyers being down 57-61, Justin Gray stepped up and scored the final five points including a tough fade away three with 0.2 left on the clock for the hard fought win over the Sharks.

Chris Taylor, Justin Gray and Fred Thomas all led the Flyers with 10 points. Bristol’s bench outscored their opponents 24-2 with Chris Taylor playing a key role in snapping the Flyers’ early 3-point shooting woes and they take the win, despite being held to 33% from the floor.

Dirk Williams was Newcastle’s highest scorer with 21 points, followed by Chris Alexander with 17. Alongside them was Rob Marsden who also scored 12 points.

A good Road win for the Lions and 6 points clear at the top.https://t.co/JpMO4zuBdT#nomercy #wearelondon pic.twitter.com/0wIltOaOou

The visitors dominated from tip to buzzer after a scorching opening period and still only have two league losses to their name, while condemning Wolves to a miserable 1-15 record. It was always going to be an added uphill struggle when Lions scored 54 first-half points which is their highest tally of the season after 20 minutes.

Ladarius Tabb led the way with another strong performance, finishing the contest one rebound short of a big double-double after plundering 19 points. Playmaker Justin Robinson was also on the money with 18 points and 5 assists.

Miki Servera led Worcester with 14 points, with Adam Thoseby having 13. Alongside this, the trio of Darell Combs, Alex Navajas and Lester Prosper also scored 11 points.

Cheshire Phoenix moved into a BBL Play-off spot Saturday night with an 83-89 away win at Surrey.

Safe trip home to the team.

The game was very evenly matched throughout, with each quarter ending with no more than a six point difference. It wasn’t until the dying seconds when Cheshire were able to obtain a final six point lead (down to 4-0 shooting) which gave them a comfortable gap to secure the win and enough to hold off the home team. Phoenix now move into joint seventh place alongside Plymouth Raiders, following the Raiders own loss to Leicester Riders.

Jalen Hayes put 20 points on the board, racking up a 75% field goal shooting percentage, whilst Daniel Norl also contributed a key seven assists. His teammates Momcilo Latinovic and CJ Gettys also dropped 16 each in the matchup.

Tayo Ogedengbe blazed the way for the scorchers with 23 points. Caylin Raftopoulous followed up with 15 and Morakinyo Williams joined them with 13.

It was yet another close game won by grit in this one as the Raiders led 21-20 after the first. The story of the game stayed the same at the half as they continued to clutch onto the led going into the break up 47-46 over the Riders. However, Leicester’s defence came through for them after they had been nine points down, as they held their visitors scoreless for seven minutes over the third quarter break. In that time, Riders scored the last 11 points of the third quarter and the opening seven of the fourth, with big man Wayne Martin getting seven of those, for a 74-64 lead. With the momentum in their side, Riders JR Holder took it up a gear to score consecutively inside the final minute.

Pierre Hampton gave Leicester crucial minutes from the bench as he scored 19 points to go with six rebounds, and that scoring tally was matched by JR Holder who racked up 21 points on 8-11 (72%) shooting from the field. Wayne Martin also helped the side with 14 points.

Josh Wilcher dropped 25 for Plymouth with Donte Nicholas having 19 and Rashad Hassan also having 10.

The game started off as a closely contested one as the Royals held only a 1 point lead after the first quarter of action. However, it quickly changed as the American Duo of Wes Washpun and Deyshonee Much came from the bench and combined for a quick 18 points in nine minutes as a run of 10 unanswered buckets made the score 31-22 midway through the second stanza on a Much score.

Royals then hit the last five of the second and the first eight of the third, to make the score 56-37 with Will Neighbour and Ed Lucas hitting triples. This then resulted in the Royals ending the third reigning dominate with a 62-77 lead over Thunder. This meant that for the rest of the game, they continued to build on the lead and come away with the win.

All 12 Royals got on the scoresheet, led from the bench by the dynamic duo of Deyshonee Much (19 points) and Wes Washpun (17 points), who combined to shoot 13-20 (65%) from the field with the latter adding three assists and four steals on his debut.

Jorge Ebanks was Worthing’s highest scorer with 15 and was joined by Ishmael Fontaine with 12 and Alex Owumi with 11.

Royals will now face the winner of Plymouth Raiders and Radisson Red Glasgow Rocks, and join Manchester Giants as the two teams already through to the semi-final stage.

#RoyalFamily we got the W – That’s 4 in a row. We moving on up. Thank you @BBLWolves for the exciting game. Safe journey home to all. 👑 pic.twitter.com/ZZQChutovf

It was an even matchup to start the game with both teams putting up 14 a piece to close out the first. The game stayed the same in the second with Worcester putting only 1 extra point up to take a 31-30 lead going in at the half. It was then a tale of two halves as the Royals put together a strong third period to take control and were able to survive a fourth quarter fightback from the Wolves with a 13-3 close to seal the win.

This fourth quarter performance was in part due to new star Wes Washpun, who has had big back to back performances, coming up big in the clutch.

Washpun scored a flurry of late points in the fourth to finish with 21 on his league debut, while Will Neighbour was close behind with 18 along with four steals. Ashley Hamilton also helped the side with 8 points.

Darell Combs had six threes on 50% shooting leading to 24 points for the Wolves with Lester Prosper scoring 12 and Rob Crawford having 8 points.

Manchester Giants 79-69 Bristol Flyers
BBL Championship
The Giants claim the season head-to-head with a 79-69 win over Bristol Flyers on Sunday.

To end the 8 game weekend, the Giants and Flyers battled it out in which was a tight start to the game with Manchester edging to a 17-15 lead to close out the first quarter. The game continued to be a close one with Flyers taking the lead 34-38 at the half and continuing to lead 55-59 at the end of the third. During the fourth quarter the Flyers led 64-69 with 5:37 left, but would not score again as Manchester put together an impressive 15-0 close to take the victory.

The loss came in part due to Bristol giving up 20 turnovers in the contest which lead to the Giants scoring 19 points, whilst shooting 54% inside.

Clayton posted another double-double with 19 points and 14 rebounds with four other players in double figures for a balanced attack. Ignus Bankevics had 16, with Vlatko Granic having 16 for the Giants.

Justin Gray led the away side with 25 which were accompanied by Tevin Falzon with 14. Fred Thomas also had 9 points.