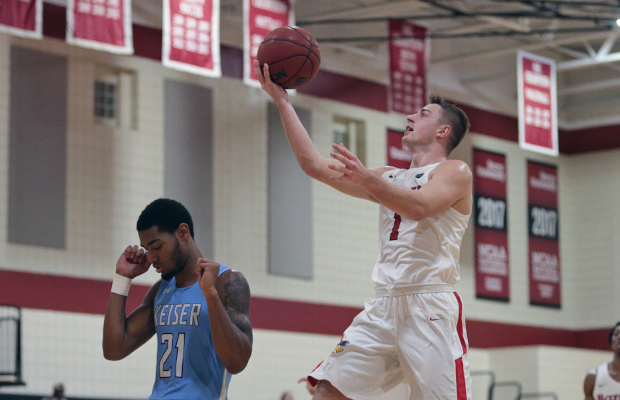 Here is a recap of all the top performances across NCAA D1, D2 and JUCO from the week of 16-22 November:

Akwasi Yeboah had another big week for Stony Brook (4-1) with 18 points and 11 rebounds in a 72-65 victory before posting another double-double with 20 points and 10 rebounds in a 36-point success as he picked up the America East Co-Men’s Basketball Player of the Week award in the process.

Senior guard Dwayne Lautier-Ogunleye helped Bradley (5-1) to the Cancun Challenge title after scoring eight points in successive victories including an impressive 59-56 triumph over Penn State in the tournament final.

AJ Edu also picked up silverware with Toledo (5-1) after scoring five points in a 64-77 victory before they defeated UC Irvine to win the Gulf Coast Showcase title.

Kavell Bigby-Williams is still unbeaten with LSU (5-0) after posting five points and six rebounds in a 74-67 success, while Micheal Anumba came up against #10 ranked Kentucky and finished with four points, two rebounds and an assist in an 87-74 loss.

The freshman making an impact 💪

Meanwhile, Josh McSwiggan scored 13 points before putting up 17 points in the last of three wins for Portland (4-2), while Sam Idowu had nine points in a big loss away at unbeaten NC State for Saint Peter’s (1-3).

Caleb Fuller had six points and two boards in a narrow 58-55 loss for UC Davis (1-5) as he continued his starting role, while Thai Segwai-Lodge had five points in a 75-89 victory for CCU (3-3) and there were season debuts in the week for Nelson Boachie-Yiadom and Shaquille Walters.

Evan Walshe (pictured) netted a career-high with 18 points on 8 of 10 shooting to help Barry (4-0) remain unbeaten following an 81-52 victory.

Senior Fraser Malcolm fired in a team-high 21 points to lead Black Hills State (1-1) to their first win, while Sam Van Oostrum handed out a total of 15 assists in two victories for Franklin Pierce (3-2) including eight in a 58-100 success.

Deane Williams continued his strong start to his senior year with 12 points and nine rebounds in a narrow 62-64 victory before adding 17 points and 10 boards in just 18 minutes as Augusta (4-1) eased to a 104-75 win.

Freshman Jelani Watson-Gayle had eight points and three assists in a season-opening defeat before repeating his eight points as Miles College (0-2) went down 55-57. Josh Apple had season-highs of four points and five rebounds in a 109-71 victory for East Central (2-1).

Two other Brits are unbeaten as Andre Arissol recorded five points, four rebounds and four steals to help Chaminade (3-0) to a 99-64 win, while Danny Evans had 10 points in an overtime triumph for Saint Anselm (4-0) before posting seven points, six rebounds and seven assists in a more comfortable 92-66 win.

Meanwhile, David Akibo had 10 points in a defeat for Minot State (4-3) before putting up 15 points and 10 rebounds for another double-double in a 72-73 road win in overtime after surviving a second-half fightback.

Jubrile Belo had a big week for Lamar (4-6) as they picked up three wins. The sophomore forward posted 18 points and 13 rebounds in 40 minutes of a 65-79 road success before grabbing 15 boards to go with eight points and seven blocks in a following 48-65 victory.

Carl Campbell posted 16 points on 7 of 8 shooting along with eight rebounds in a dominant display by Frank Phillips (8-2), while Romario Spence had 14 points and eight rebounds in another victory before the duo shared 17 points in an 85-60 win.

Another British pair of team-mates starred as Amin Adamu had 14 points on 6 of 7 shooting, while Zion Tordoff went 5 of 5 in his 13-point haul along with nine rebounds in a 110-56 rout for Casper (7-1). Adamu then hit double figures again with 10 points with Tordoff posting seven rebounds and seven boards in an 85-56 victory.

Meanwhile, Obi Agu put up nine points, nine rebounds and three assists in a hard-fought 93-90 defeat for Western Wyoming (3-5) before responding with eight points and 11 boards in an 81-98 road victory and there was more joy for Kayne Henry as Northwest Florida State moving to 7-0 with the GB U20 scoring eight points as his side ran out 105-72 winners.

Moses Byekwaso starred with 23 points, four assists and four steals in an 83-81 triumph for Northeast (5-4), though they suffered a heavy defeat at the hands of Lake Region State (7-1) with Ashley Briggs scoring four points off the bench, while Joel Ufele had 10 points in the loss.

Also, Johde Campbell scored eight points before following it up with 13 in two defeats for Missouri State-West Plains (4-3), while Leighton Elliott-Sewell scored nine points in an 89-80 loss for Polk State (2-4).