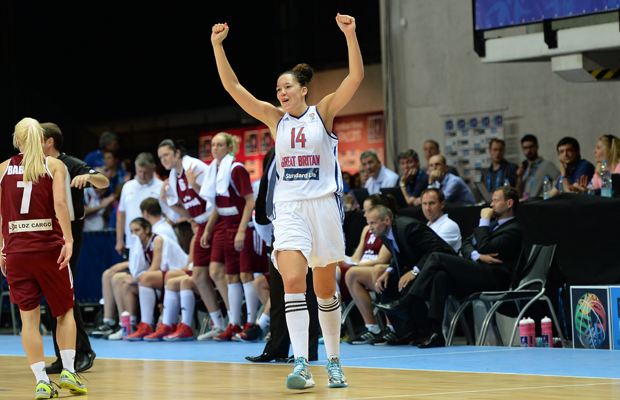 Great Britain international and Olympian Azania Stewart has confirmed the next two upcoming EuroBasket Women qualifiers will be her final games of basketball as she has decided to retire.

The 29-year-old Stewart made her GB Senior debut in 2009 and has since been to an Olympics, three EuroBaskets and won a Silver medal at the Commonwealth Games earlier this year with England.

‘Z’, as she is affectionately known as, calls time on a six year professional career, that has seen her play in Spain, England (briefly) Australia, Hungary, and Latvia this past season – where she won two titles domestically and played EuroCup with TTT Riga.

Video: Azania talks about her decision to retire on the Hoopsfix podcast – full episode coming soon!)

She will reach her 100th cap on Saturday when GB take on Greece at the NBPC, and will officially finish with 101 appearances for the Great Britain Senior Women, as she will round out her career against Portugal on Wednesday night, again in Manchester.

“I have to give thanks for everything that basketball has given me,” Stewart told Hoopsfix.

“The game has really shaped who I am today. Looking back, all the sacrifices have been worth it.

“There have been so many moments; graduating from Florida University, going on to the Olympic Games and of course winning Silver in the Commonwealth Games this year which is one of the greatest moments of my career.

“I must thank all my coaches for letting me flourish on and off the court, but most importantly my teammates, or should I say my sisters!

“I have had so many women who have impacted my life and helped me through the wave of each season. It was so important to me to lead, bond and be a friend to each one of my teammates, without them I had no army to go to war with, so, thank you ladies.

“Finally, I have to thank my family for the constant prayers and support plus believing in me at 16 to let me go and pursue my USA dreams.

“It’s time for me to hand the torch to the younger ladies to push forward with the game I love so much. I hope I can leave a ‘Z’ sprit and love for the game.”

Originally a product of the Haringey Angels programme, Azania made the switch to basketball after being spotted playing netball. Making her debut for the England Under-16 Women at the 2004 Division B European Championships, Stewart soon made the jump to the US, following a future GB teammate – Lauren Thomas-Johnson – to Notre Dame Academy, a powerhouse high school that was nationally ranked for her Sophomore year. With her height and rapid development, and reclassifying for one more year at Notre Dame, it wasn’t long before the colleges came knocking.

She chose to attend Florida, where an impressive four year career saw the 6’4″ centre ranked no.3 all time in the programme’s record book for blocked shots (205), and fifth all time in field goal percentage (54.4%), whilst going to the NCAA tournament in her Freshman and Senior years; both times losing to the eventual champions in the second round.

She represented Great Britain at the World University Games in 2009, helping them to a sixth place finish, averaging 11 points and a team-high 9.3 rebounds per outing.

Whilst in the US in 2005, London won the 2012 Olympic bid and making that squad became a core motivation moving forward.

Stewart was first called up to the GB Seniors in 2008, making her Senior debut a year later in 2009 and has since gone on to 99 caps (soon to be 101) for her country, becoming a centre-piece to the squad with her leadership and energy, whilst forging herself a stable professional career on the continent.