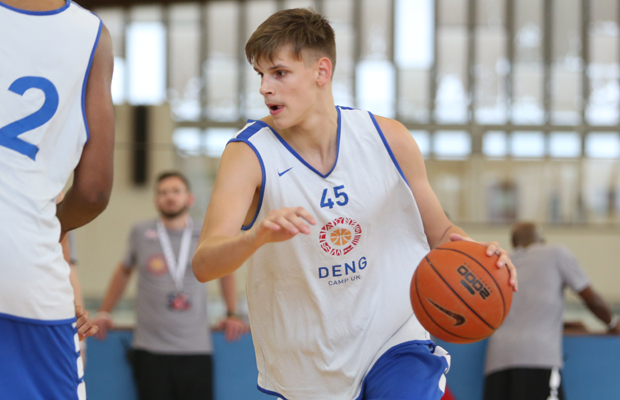 Myerscough and Great Britain Under-18 guard Mate Okros finished up with the number 1 ranking after the 2018 edition of DENG Camp Top 50.

Okros was the standout from the opening day of the camp, taking the number 1 spot immediately and never dropping as he cemented his status amongst the elite of his generation. He begins the season number 1, and will now look to hold onto that position throughout the year as the rankings will continue to be updated until immediately before the 2019 camp.

“It’s a great achievement, coming in here and showing what I can do and all the hard work paying off that I put in over the season,” Okros said to Hoopsfix after finding out he’s number 1.

“I feel like I’ve come in here and showed what I can do, facilitating and shooting the ball.”

Luol Deng himself was impressed, commenting:

“As soon as I saw him play I could see his high IQ and understanding of the game! He has the tools to score in many ways so I started to nickname him AK47.

“Looking forward to seeing where he can go in the future”

His club and academy coach Neal Hopkins, ensured he drafted him into his team for the camp – where they were champions – and believed Okros was the standout.

“There’s a lot of talent here, Mate has been hyper consistent,” Hopkins said after they won the playoff final.

“He made some outstanding plays from the perimeter, defensively he’s been great, led our team. It’s tough because the talent is high but for me Mate has been the standout player.”

And looking ahead to the coming season, where Myerscough will compete in NBL Division 2 and the European Youth Basketball League for the first time (along with the EABL), Hopkins thinks Mate will only continue to impress.

“It’s a really big year for him,” he said. “He’s generated a lot of interest over the summer, we know there’s some areas in his game we need to work but the fundamentals and basics are there. I expect him to lead us in the EABL, EYBL and Division 2.

“It’s a step up for or programme, it’s a step up for him, he’s been so fantastic, such a coachable kid, I don’t expect anything more than his reliability and his effort throughout the course of the season.”

Rounding out the top 5, were Canterbury’s (Spain) Tomiwa Sulaiman at number 2, Charnwood’s Hosana Kitenge at 3, and Barking Abbey duo Theo Hughes and Ade Adebayo at 4 and 5 respectively.

Find the full top 20 below and stay tuned to DengCamp.com for updates throughout the season.

Tune in to watch the All-Star game from London, UK!