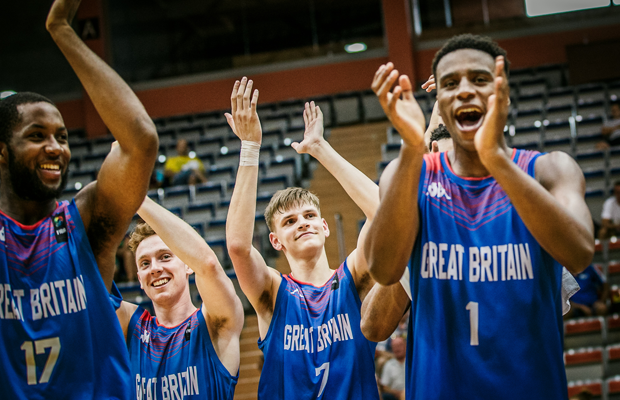 Great Britain Under-18s advanced to the quarter-finals with an impressive 77-73 victory over Finland in the Round of 16 at the European Championships in Liepaja, on Wednesday.

GB retain their Division A status for 2019 by securing a top eight finish and can now target a place at next year’s FIBA U19 World Cup with the top five teams earning spots.

“We all knew the significance of today’s game before it took place,” Head Coach Alan Keane said after the game.

“However, we never spoke about it and it was never our focus.Our only focus was being present in every moment, to play without fear of outcome and do the best we can with what we have in every moment.”

“That was no different from training camp day 1 in Spain to this very moment today. I’m proud of the journey and commitment from all staff and players who bought into every detail.

“We are not done. Tomorrow we prepare for the next game and our only aim is to be better than we were today. Go GB.”

Alan Keane’s side led by as many as nine points in the contest, but saw Finland battle back before GB recovered down the stretch to take the win.

Mate Okros top scored with 18 points in the win, while Nathan Robinson added 14 points. Jacob Round had 11, while Kareem Queeley finished with 10 points, 10 rebounds and six assists.

GB made a bright start and built a 24-19 cushion at the end of the opening period before seeing their lead cut to just two points at the break as they held a narrow 38-36 half-time advantage.

Finland moved ahead at 50-48 in the third, but Robinson fired in back-to-back triples to spark a strong finish to the period for GB as they took a 62-55 lead into the final quarter.

However, Finland seemingly control as a 16-5 start put them up 71-67 inside the final three minutes. GB responded with a 5-0 run as Round hit the go-ahead triple to set up a tense finale and they were able to close out the win from the foul line having held their opponents to just a single field goal in the closing stages.

GB’s quarter-final against either Turkey or Latvia will take place on Friday.