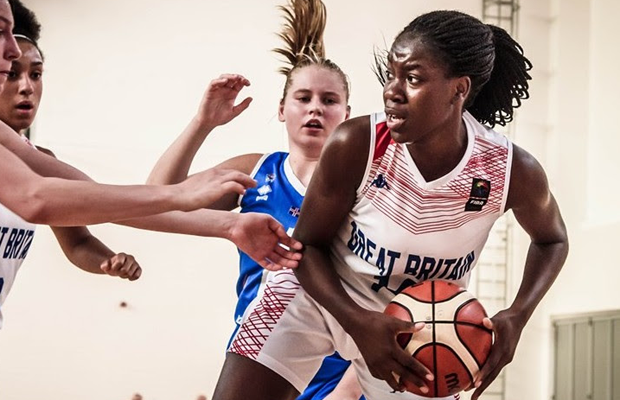 Great Britain Under-16 Women came through with a 51-37 victory over Iceland in their latest Group A game at the FIBA U16 Women’s European Championship in Podgorica, Montenegro on Monday night.

Becky Dwomoh (pictured) had a game-high 15 points and 17 rebounds, while Jade Mbam, Lilly Annim and Pollyanna Storie each scored 9 points.

Head Coach Kenrick Liburd commented: “I thought we did a good job today. I thought we rebounded well in the first half but we lost discipline again in the last few minutes which allowed them to come back.

“Our challenge in the second half was to be disciplined defensively and to keep them to less than 40 points with Rebecca so dominant off the glass, is pleasing.

GB led from start to finish, leading by as many as 17 and dominating on the glass where they converted 17 second chance points.

The squad had been saddened to learn on the rest day that Asha Andrews would play no part in the tournament due to injury, so GB will play their remaining games with a short-handed roster.

GB will complete Group A action when they face unbeaten Group leaders Greece on Tuesday (1400 BST) with an outside chance of making the last eight still intact.