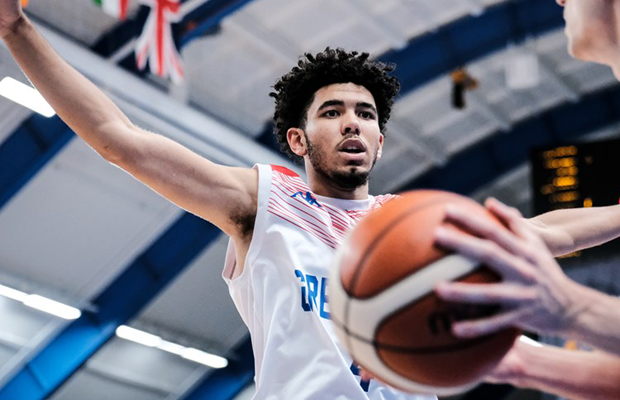 Head Coach Alan Keane has named his final 12 to take on Division A opposition at the FIBA Under-18 European Championship in Latvia later this week.

With Robert Banks (shoulder) and Theo Hughes (ankle) being forced to withdraw due to injury, Paisley’s 6’1 shooting guard Chris Feeney – now based in France and a veteran of last year’s U16 team which finished 4th in Sofia – is a late call-up to the 12 and joins Myerscough’s Mate Okros and Spain-based Tomiwa Sulaiman moving up an age group.

Three players from the U18 team which secured Division A status in 2017 make the flight for a second year at this level – Hosana Kitenge, Jacob Round and Nathan Robinson.

Coach Keane commented: “We have had a uniquely challenging and at times, physical preparation for this tournament which has definitely increased our cohesion as a group which was good to start with.

“It is always difficult to narrow down to a final 12 but in these circumstances, it has been even more difficult and credit to Chris Feeney who responded to the late call-up.

“The mood among the 12 is excellent going into the tournament and I look forward to seeing how these guys develop when we get to Latvia.”

Eight of the 12 players competed in the Hoopsfix All-Star Classic earlier this summer.

After the initial Group D encounter against Montenegro on Saturday July 28th, Britain then play Serbia and Lithuania, before their round of 16 game on August 1st.

Every GB game at the FIBA European Championships will be streamed live, stay tuned to Hoopsfix.com for links.