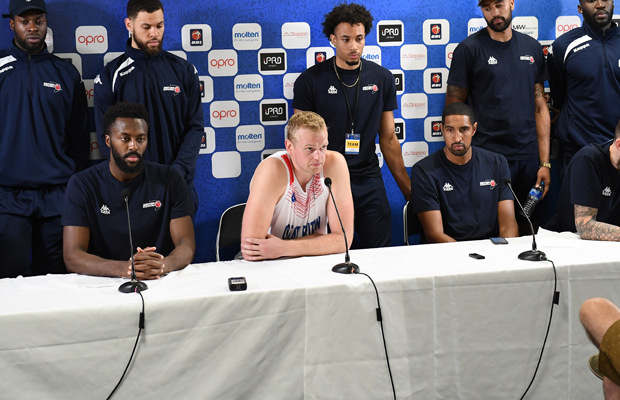 Dan Clark and the rest of the Great Britain Senior Men’s team have released a damning statement, criticising the political in-fighting that is happening between the British Basketball Federation (BBF) and Home Country Associations (HCAs), as they try to resolve their governance and financial structure moving forward.

Following Great Britain’s tough loss to Israel, forcing them out of the FIBA World Cup 2019 qualifiers, Clark called for a press conference and condemned the leaking of information that has happened during the past week, criticising leadership for having ‘no understanding’ of elite basketball, and saying the players will no longer be silent.

Focusing on the Home Nations, the statement paid particular attention to staff salaries of managers in Basketball England, insinuating it is their preference to increase management costs whilst reducing money available to support the national team programmes.

Though the statement was largely one sided – clearly having been checked over and approved by the BBF – it concluded with asking why everybody cannot work together in basketball’s best interests.

The full statement can be read below:

“On behalf of the players involved this week, we find it unbelievable, disappointing and frustrating that while we were preparing for two very important World Cup qualifiers, a report about proposed budget cuts and restructuring was leaked.

“Some of the leaders of our game have shown no understanding of what we are trying to achieve and no respect for our commitment in playing for our country. Now the games are over, we will not be silent again.

“British Basketball was set up originally with co-operation from the Home Countries. It was intended to run national teams, oversee professional British leagues and become a recognised member of FIBA. That was with full agreement of the home countries.

“So how is it that now that they can propose cutting back the national teams? We were all told about the 2012 agreement as players and we understood that we would play as GB.

“How are the BBF to access any means of income without access to commercial and membership fees? Surely the home countries have a role to help raise the funds to sustain a structure they helped set up.

“It is also interesting that Basketball England now pays more senior managers and costs have gone up significantly since 2012, yet they claim no responsibility in supporting the GB setup. Is this the same across the Home Countries?

“Regardless of how good or bad the BBF has been, the home countries have decided that we are not worth supporting – not my team mates, not the young players heading across Europe to compete for junior teams.

“But apparently, that’s not the same when it comes to big increases of management costs.

“After a decade’s commitment from players like Kieron Achara, Eric Boateng, Drew Sullivan, Stef Collins, Chantelle Handy, Jo Leedham and many, many others – THANK YOU for letting us know that a system that you helped set up does not work for you.

“Instead of working together to resolve the issues, you are dumping on those who have given so much for their sport and they country.

“When we play for GB, we want to win and we want to represent our country well. But year on year, our sport is portrayed as a beggar looking for Government bailouts. We received great support from Sport England but their role has now changed.

“Now, the goal is always to survive each year with no time for mid or long-term planning.

“Before the recent parliamentary debate, Temi Fagbenle said she felt that her national shirt have been ripped off her back. MPs listened and showed their support for basketball and its role among young people and diverse communities.

“The Government listened and enabled us to play here in Glasgow and for the rest of the year. Now it’s up to us as a sport. And with their latest proposals, the leaders of the home countries are setting our national team shirts on fire, like rubbish.

“The latest proposal is that national team funding should be cut, not because it’s not worthwhile but because it will save money while large salaries are paid to managers. To read that we can deliver the national teams on 50% of the already meagre budget betrays a complete lack of understanding of elite sport.

“We do now know of any group that assembles junior teams at the airport without any preparation before a European Championships. How would this develop our young talent? But it is apparently now an option.

“Despite this, we have qualified for EuroBasket in all but one of the last five years, in both the men’s and women’s game. We have junior teams in Division A this year and we are one of the most popular sports in the country.

“But the biggest failing is the lack of ambition to compete at international level among some of our sport’s leaders.

“So as players, before we return to compete in September, we have a number of questions we want answers to:

• Why with limited budgets do we not look at working together in basketball’s interests?
• Why are we duplicating management and functions, spend tens of thousands of pounds we do not need to?
• A common vision of the sport in this country was agreed in 2012. Why are the home countries not helping to realise this vision and drive basketball to have the standing and respect so many people desperately want it to have?

“We have a great sport.

“We need visionary leadership that understands the game.”