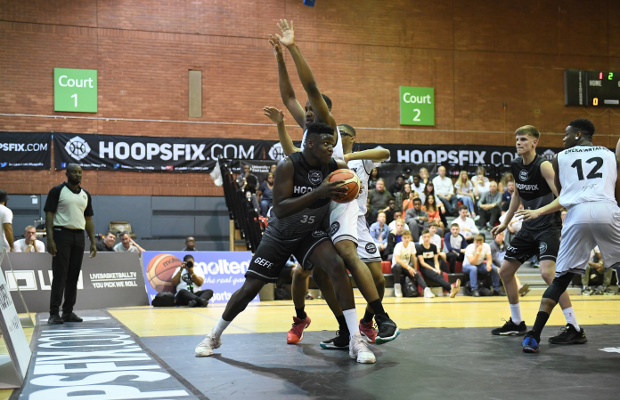 Team Black ran out 85-71 victors over Team White in the first-ever Underclassmen game at the 2018 Hoopsfix All-Star Classic, in Brixton, on Saturday afternoon.

Ade Adebayo took MVP honours in helping lead his side to victory with a team-high of 15 points, while there was valuable scoring support from Mate Okros, Hosana Kitenge and Peter Turay as the trio all added 11 points apiece.

“It’s an incredible event,” declared Team Black Head Coach, Ian MacLeod. “It really is a centre stage for junior basketball in this country and it was really great to be part of it and contribute.”

Both teams made a strong start in a fast-paced opening period as they shared 50 points as Team Black edged ahead at 27-23.

Team White levelled at the mid-point in the second and Jamie Gray produced the play of the game late in the quarter, but his side would trail 44-39 going into the half-time break.

Slow-mo of the half! Jamie Gray (@jamieg127) crushes the huge poster dunk for Team White in the Underclassmen game! #HASC18 pic.twitter.com/XqKZgsCtpF

Niall Harris capped a 15-4 start to the third with a three to put Team White up 48-54 before a strong response saw Team Black re-gain their advantage with an 8-2 close making it 63-60.

An 8-0 run at the start of the fourth saw the gap increase with strong finishes inside from Theo Hughes and Hosana Kitenge. The lead hit double figures at 77-66 on the back of five straight points and there was no way back for Team White.

Harris top scored with 18 points in the defeat, while Nathaniel Delaney-Powell and Jonathan Brown had 11 points apiece.