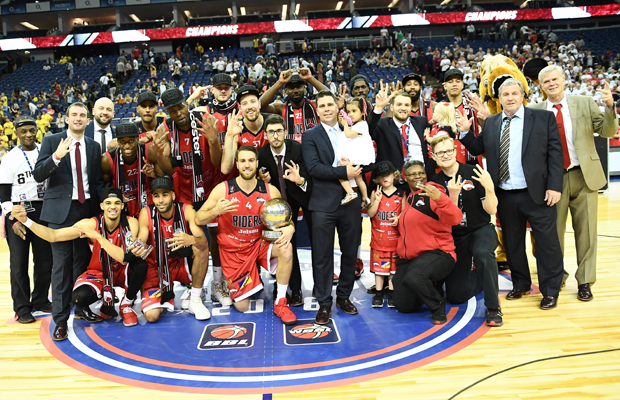 Leicester Riders completed historic back -to-back treble seasons with a 81-60 win over London Lions in the BBL Play-Off final at the O2 on Sunday evening.

TrayVonn Wright had a highlight-filled 11 points and 13 rebounds to pick up finals MVP, whilst Tyler Bernardini had 17 points 7 rebounds and 5 assists – announcing his retirement after the game, and Pierre Hampton added 19 points.

“I thought coming into the game the guys were a bit disappointed that we weren’t seen as favourites,” Riders Head Coach Rob Paternostro said after the contest.

“When we had the last meeting last night at the hotel I sensed the guys were ready to prove some people wrong today. We felt like we’re a championship team and we wanted to do it on the defensive end.

“I said in the locker room at halftime, don’t worry about the offence, the shots will go down when they need to, we want to do it on the defensive end and to hold them to 34% shooting and 60 points when they’re averaging about 87 points a game goes to show you how important our guys take the defensive end.”

JR Holder led the scoring for Leicester with 20 points, adding 4 rebounds and 5 assists. After a tight opening 10 minutes, the Riders produced a decisive 10-2 run to end the half and seize the game’s momentum. Leicester outscored London 27-14 during the second quarter.

“I thought it was an incredible way to finish a season that was long, that we battled through so much. For this group to be here today, I’m so proud of everyone in the changing room. From the coaching staff to the players, we battled, we had grit every night and I think that’s the defining factor of our group, our toughness and our grit wore out, not only for the 40 minutes tonight but the season.

“To be here in May, standing here as treble champions for the second year in a row is a fantastic accomplishment and it has been great to be a part of.”

The Riders clamped down defensively to hold the Lions to just 34% shooting and only 10% from beyond the arc.

Brandon Peel had 22 points to lead the hometown side, whilst Paul Guede had 10 points.