England Bounce Back with Victory Against India at Commonwealth Games - Hoopsfix.com

England Bounce Back with Victory Against India at Commonwealth Games 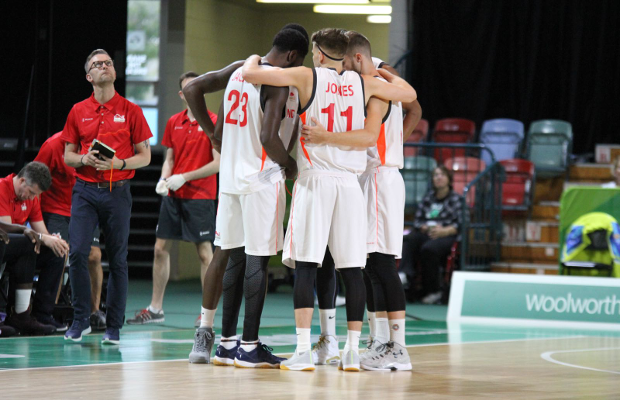 England put their opening loss against Scotland behind them with a comprehensive 100-54 win against India in Townsville, on Saturday morning.

Andreas Kapoulas’ side are now 1-1 with a third and final pool clash to come against Cameroon as they look to secure a top-two finish to advance to the Qualifying Finals.

India raced out to a 4-11 start with Walker scoring England’s first two scores in the contest. Anderson scored seven points with Thoseby adding four as part of a dominant 15-2 run as England stormed ahead for the first time and led 19-15 at the end of the first.

Anderson was quick to move into double digits at the start of the second with his second triple with Kofi Josephs following suit from downtown with England soon stretching their advantage into a commanding lead. The gap hit 22 points at the half as England went into the break up 46-24.

There was no let up when play resumed as England outscored their opponents 29-11 in the third to take a dominant 75-35 lead into the final 10 minutes.

India came out firing in the fourth with a flurry of triples, but the damage had been done and England were able to complete an emphatic success with a strong finish to bring up their century with 10 players on the scoresheet.

– It was England’s first win at the Commonwealth Games since beating Nigeria for bronze in 2006.
– England started with Jones, Thoseby, Jackman, Walker & Gilchrist
– Andy Thomson was the only DNP for England
– England finish the pool stage by taking on Cameroon (1-0) tomorrow (Sunday) at 5am
– Scotland also in action today as they face Cameroon before playing India tomorrow (Sunday)