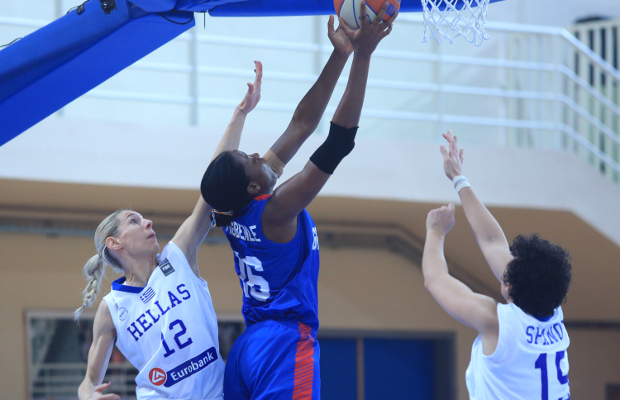 Great Britain’s Senior Women suffered their first defeat of their EuroBasket Women 2019 Qualifiers campaign as they fell to a 61-59 loss against Greece in Kozani.

Chema Buceta’s side drop to a 1-1 record in Group D, despite a valiant effort and are next in action in February with away trips to Portugal and Israel.

Joey Leedham-Warner led the way with 17 points and 10 rebounds, while Temi Fagbenle added 16 points on 8-of-13 shooting.

Fagbenle had the opening score and with the hosts struggling to find their range early on, GB moved into a 6-13 advantage.

However, Greece closed the quarter on a 7-0 run including a late three just before the buzzer to tie the game after 10 minutes.

Leedham-Warner banked in a three to open the second period before Greece went on another 7-0 run to take their first lead of the game. Fagbenle levelled at 20-20 with consecutive scores.

Greece again beat the buzzer to end the half with a 30-26 advantage with the visitors shooting 1-of-13 from 3-point range.

GB tied the game early in the third, but a 9-0 burst put the home side in control and the lead hit double figures before Eilidh Simpson’s three made it 46-39.

Greece continued to keep GB at bay with timely shots, though Leedham-Warner helped her side back within five with three points to make it 57-52.

The battle continued and the deficit was cut to just two points inside the final minute with a late flurry from Leedham-Warner, but GB ultimately came up short.