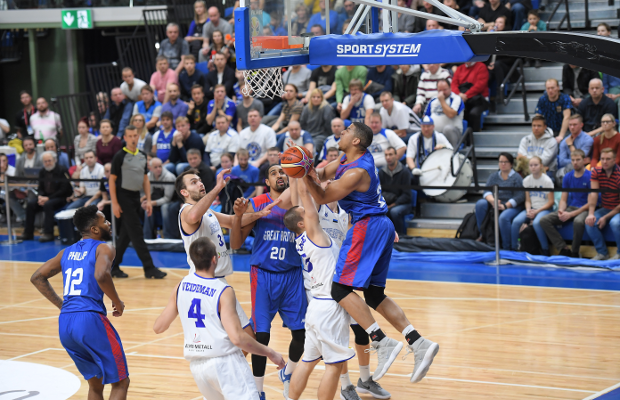 Great Britain Senior Men’s hopes of reaching the Second Round in the FIBA World Cup Qualifiers were dealt a blow after suffering a disappointing 73-70 loss against Estonia in Tallinn, on Monday.

Tony Garbelotto’s side are now 0-2 in the group ahead of a tough February window that sees GB head to Israel and Greece for important road fixtures.

“Let’s congratulate Estonia, it’s a great win for them,” Garbelotto declared. “Our players looked a little tired from the overtime game on Friday, it wasn’t just an overtime game, it was emotionally draining, tough travel day, but that’s the same for everyone in this competition.

“I thought we looked a step slow at the start of the game, not really at the pace. I thought losing Andrew Lawrence was critical to the game – to lose a player of his quality really hurt us on our rotation.

“The players played with a lot of heart and determination, something we’re trying to build so we have to take that as a positive.”

Ovie Soko top scored with 17 points in the loss with Myles Hesson adding 14 points and eight rebounds from the bench.

“I think we played with high energy, together as a team, we just couldn’t find a way to get the ball in the basket,” said Hesson.

“We shot a low percentage in the paint, we got the shots, we just didn’t make them today.”

After a slow start, GB found impetus from the bench with Hesson netting a triple in the middle of a 7-0 run to lead 8-12. Another triple from Hesson followed by one from Kieron Achara helped push the lead out to seven.

GB had an 18-24 advantage after 10 minutes, but would endure a tough second period.

Defensive lapses, leaving uncontested shots coupled with struggles on the offensive end – GB shooting 3-of-15 from the field in the quarter – allowed the hosts to take control as a 12-3 opening was stretched out to a 44-36 half-time advantage for Estonia.

An early three from Luke Nelson sparked life into the second half with Will Saunders scoring his first points from downtown to cut the deficit down to two.

Estonia briefly pulled away, only for a 7-2 response from GB to reduce the gap back to two at 59-57 at the end of the third with Tarik Phillip throwing down on the break.

However, any possible momentum gained was wiped away as Estonia outscored GB 11-1 in a dominant spell to establish a commanding 68-58 lead with over four minutes left on the clock.

GB responded with an 8-0 run including a couple of big offensive putbacks from Hesson to force their opponents into a timeout. This time it was Estonia with the response as consecutive scores pushed their lead out to six at 72-66.

Hesson fouled out, but GB had an opportunity to pull off more late heroics with Dan Clark’s 3-point attempt to force overtime off target.

“Our basketball performance was poor, we missed a lot of easy shots,” added Garbelotto.

“I’m sure Estonia’s coach can have his own take on it, but Dan Clark can make 8 of 10 of those last 3-pointers, so a touch lucky there as well, it was a good look and credit to my players to get us to that stage.

“It’s extremely disappointing – we’ve just lost two games now that were very winnable. It puts us in a tough position, 0-2, but I know in the next round in February, we’ll come back stronger, we’ll come back better.

“I’m looking forward to playing Israel and Greece, then the subsequent third window we’ll be even stronger.”

– GB went with the same starting lineup with Okereafor, Nelson, Murray, Clark & Soko
– Tony Garbelotto’s side were beaten 92-95 in their opener at home to Greece
– Greece are 2-0 in the group after beating Israel today
– Will Saunders, Carl Wheatle and Eric Boateng all made their first on-court appearances
– Andrew Lawrence only played 8:38 in the contest
– GB next face Israel on February 23, 2018