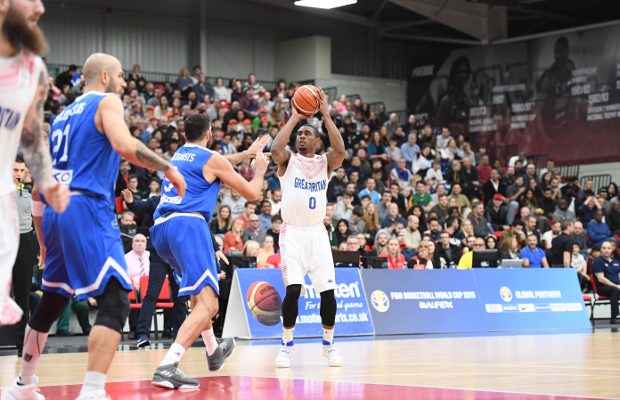 Great Britain Senior Men overturned an eight point deficit in the final minute of regulation, but fell to a 92-95 overtime loss against Greece to start their their FIBA World Cup 2019 Qualifiers campaign.

Tony Garbelotto took charge of his first game with his side producing an incredible late rally before coming up agonisingly short in the extra period.

Down 6 with 24s remaining? No problem for @gbbasketball. If you only watch one thing today, make it this! WOW. 👀🇬🇧🏀 #Hoopsfix #FIBAWC pic.twitter.com/rTrG62LK6s

“I’m extremely disappointed – we threw the game away,” said Garbelotto post-game. “I’m proud of the guys, the way they fought to get back in the game. It was a miracle comeback, a 1 in 100 comeback, especially against a team of that level.

“We’re trying to mould something in a slightly different way to Coach Prunty. I take responsibility because it was a poor play call at the end of the overtime period.

“That’s a win GB has to convert. I don’t care who Greece turned up with, we just have to convert that, let’s just hope that doesn’t hurt us in the future of this qualification period.”

Andrew Lawrence had 14 points and six assists with Ovie Soko posting 13 points and nine boards and Gareth Murray also in double figures with 12.

Soko announced his return to GB colours with his side’s first five points in front of a near sellout at Leicester Arena before Clark followed suit for an early 10-6 lead. Turnovers began to mount – six in total in the opening period as Greece went on a 9-2 run.

GB – trailing 17-18 after 10 minutes – made a strong start to the second, led by Okereafor impressing at both ends, with multiple blocks and two threes in an 11-2 spell capped by Myles Hesson’s first points on his return from injury, making it 30-24.

.@LukeNelson95_6 finds Ovie Soko for the big time throwdown for @gbbasketball vs Greece in the first half! 💪🇬🇧🏀 #FIBAWC pic.twitter.com/AJLKRfvIQR

The visitors responded with the stronger finish to the half to leave the game tied at 37-37 heading into the half-time break with GB shooting 7-of-12 from 3-point range when defending the perimeter was often their achilles in Istanbul this past summer.

Okereafor continued to make big plays at the start of the third, while Clark netted his third triple as GB built their largest lead at 50-43. The pace of the game slowed with GB struggling to make shots and Greece were able to take advantage, re-gaining the lead ahead of the final period, up 54-55.

Luke Nelson fouled out on a technical early in the fourth as GB hit the penalty bonus with over six minutes left in the game. Ioannis Boroussis continued to be lethal for his side in amongst a pivotal 14-4 spell to make it 63-75.

GB continued to battle late on and made a late rally to cut the deficit. Tarik Phillip scored his first points for GB with a three in the final minute, but the game still looked beyond the home side at 74-82 after a huge throwdown from Boroussis.

However, an incredible finale ensued with Okereafor’s and-1 followed by a tip-in from Murray before back-to-back huge steals led to important finishes from Murray and Phillip to tie the game at 83-83.

GB looked to be in the ascendancy with a 90-86 advantage in overtime before Boroussis moved to game-high 32 points and Giannis Athinaiou proved to be the Greek hero with a decisive step-back three in the closing seconds.

A turnover followed and Greece sealed the win with 1-of-2 from the line to leave GB 0-1 in their journey to the World Cup.