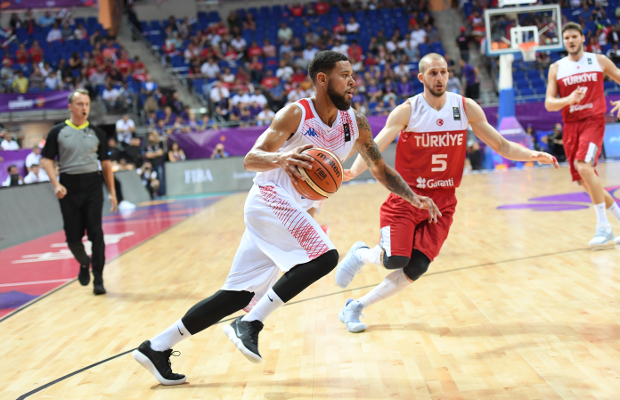 While some of the headlines have been grabbed by the standout performances of Gabe Olaseni, GB’s exciting back-court is proving its worth at EuroBasket 2017.

Head Coach Joe Prunty has put faith in Teddy Okereafor and Luke Nelson – two of the youngest players on the roster – to play starting roles in their first major tournament at Senior level.

The experience of Andrew Lawrence is a welcome boost off a bench that also contains three other 2012 Olympians in captain Kieron Achara, Kyle Johnson and capped-centurion Eric Boateng.

And different in-game rotations have created different partnerships with the Okereafor-Lawrence tandem blossoming against high-level opposition.

Okereafor – who played in Italy’s Serie A last season – and Lawrence, who was at Chalons-Reims in France, combined for an impressive 19 assists in GB’s 97-92 defeat to Latvia on Monday.

And, Okereafor believes the partnership is continuing to grow.

“I think it just comes from the years of playing together, playing in the summer and just building that chemistry,” the 24-year-old said.

“We’ve played a lot together in the fourth quarter and throughout the game and we know each other’s spots and when to pass each other the ball.

“Getting out in transition and running is where we excel – if we can get the ball to each other, we can pick apart defences.

“It worked out that Kyle [Johnson] hit some shots [against Latvia] and that helped us too.”

The trio all factored in GB’s comeback against Latvia as they battled back from 29 points down with a 34-13 final period.

However, that first win remains elusive with GB’s heart and fight not enough so far to get over the line.

“The games have gone tough for us because we haven’t played our best,” Okereafor added.

“We’ve made comebacks and shown fight with improvement, but haven’t pulled out games the way we wanted to.

“It’s been tough, but we have to move on and come out ready to play.

“Personally, [EuroBasket] has been a great experience, it’s a high level and playing against the best in Europe.”

With 21-year-old Jules Dang Akodo also gaining valuable tournament experience and the likes of Devon Van Oostrum and Mo Soluade not with the squad, GB’s back-court looks in safe hands for the years to come.