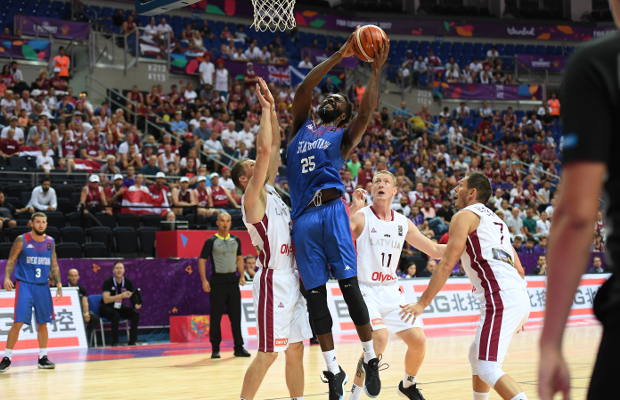 Joe Prunty has praised the efforts of Gabe Olaseni after he produced another impressive display for GB at EuroBasket 2017.

The GB play-caller saw his side suffer a third straight defeat in the tournament as they went down against Latvia, but Olaseni’s performances have been a major positive.

“Gabe’s outstanding – he’s been great for us,” Prunty commented in the post-game press conference.

“The things that he does to impact the game – offensively he gets to his spot and consistently gets there.

“The beauty of him is you don’t have to worry about calling a play for him – he just stays focused on what the goal is and just wants to win.”

Olaseni has recorded double-doubles in all three games for GB so far with a tournament-best of 23 points against Latvia.

The 25-year-old is averaging 19.7 points, whilst leading the tournament with 11.3 rebounds per game as well as topping the efficiency rankings with a 29.3 mark.

“He’s prepared to do the dirty work and all three games he’s a double-double, but that doesn’t tell the whole story.

“He’s always positive, very unselfish and knows where to be on the floor, not only for him, but for us to be effective as a team.

“With a guy like him, he’s invaluable for what he’s doing and what he’s done since joining the British [National] team.”

Olaseni will compete in the ACB next season after signing with Fuenlabrada with fellow team-mates Dan Clark, Luke Nelson and Jules Dang Akodo also set to play in the Spanish top-flight.