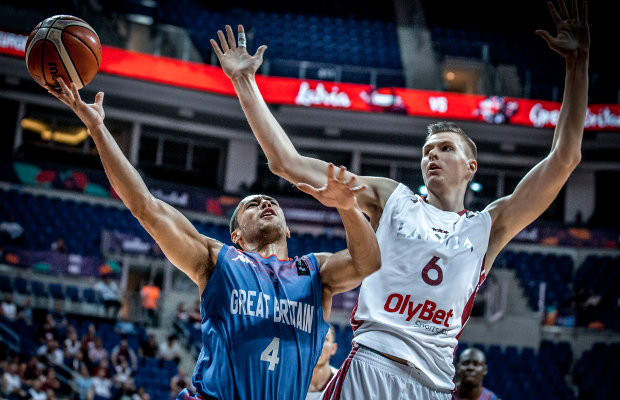 Great Britain Senior Men suffered their third straight loss at EuroBasket 2017 after going down 97-92 against Latvia in Istanbul, on Monday.

The task in the tournament has expectedly grown in difficulty for Joe Prunty’s side and with Latvia producing a 3-point shooting clinic, GB face an early exit.

Having trailed by as many as 29 points in the second half, GB battled back with a spirited fourth quarter effort to close to within five points late in the game.

Prunty: "Tough Q3 defensively, too many easy looks and they got a big lead. We didn't do a good enough job defending the three." #EuroBasket pic.twitter.com/4x7aNO0R8a

Gabe Olaseni led the way with a 23-point effort on 10-of-11 shooting to go with 10 rebounds, while Kyle Johnson added 13 of his 18 points in the fourth.

Teddy Okereafor was also in double figures with 12 points along with nine assists with Andrew Lawrence also completing a double-double with 11 points and 10 assists.

Much of the focus would have been on NBA superstar Kristaps Porzingis and the 22-year-old was all over the opening exchanges. Three dunks – two of which uncontested – and a long-range score in an opening 9-2 burst to force Prunty into an early timeout.

GB responded with a 6-0 run and, despite another three from Porzingis, soon levelled with another run of six straight points. Davis Bertans – who had missed his side’s previous game with a finger injury – fired a couple of triples off the bench as Latvia moved 25-20 ahead.

The San Antonio Spurs forward then started the second with a four-point play before Lawrence netted GB’s first triple of the game to spark a 9-2 run that included a putback dunk from Eric Boateng.

Latvia began to really heat up from downtown with five triples in a devastating spell to pull clear for a double-digit advantage, despite some extravagant missed dunk attempts. Porzingis moved to 21 points on 8-of-10 shooting, but GB did finish the half with a 6-2 run to stay in contention, down 40-50.

Latvia shot 50% from beyond the arc with 10 makes in the first half and continued to light it up when play resumed as Bertans went back-to-back to extend the advantage to 60-44. Olaseni continued to impress with his mid-range game, but GB were unable to contain Latvia’s outside shooting.

The lead ballooned beyond the 20-point mark as Latvia poured in 34 points during the third period with Okereafor netting a late three to reduce the deficit to 84-58. With Latvia’s starters able to sit out the fourth, GB enjoyed a brighter spell without a miss to cut the gap to 16.

Johnson led the surge with a scintillating fourth quarter display with 13 points helping GB storm back to within five points inside the final minute. Latvia survived a nervy finish to hold on for their second win of the competition.

GB shot 60% from inside the arc, while being torched by Latvia’s outside shooting as they finished 17-of-34 from downtown.

Porzingis finished with 28 points along with eight rebounds and two blocks with Davis Bertans adding 22 on 7-of-8 3-point shooting as the NBA duo combined for 50 points.