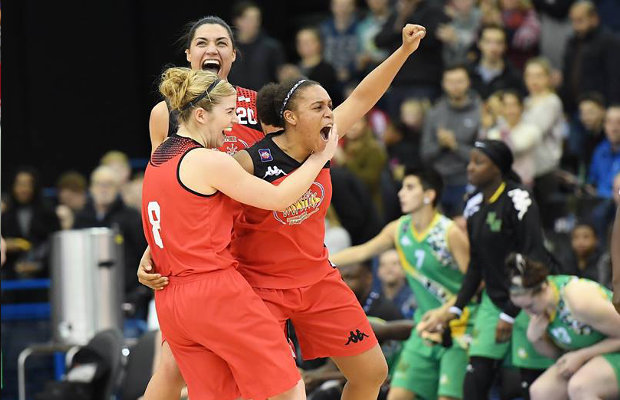 Manchester Mystics have retained their key British core ahead of the 2017-18 WBBL season with Georgia Jones, Dominique Allen, Lauren Thomas-Johnson and Rheanne Bailey all returning.

The experienced quartet helped Mystics claim their first WBBL title back in January as they defeated Nottingham Wildcats in Birmingham in the Cup Final.

Allen was the Final MVP with an impressive performance that also helped her earn the Player of the Month award – averaging 9.1 points and 9.6 rebounds per game on the season.

The 2012 Olympian was joined in the All-British Team of the Year by star point guard Georgia Jones – daughter of Head Coach, Jeff Jones.

Jones put up 17.8 points per game as one of the league’s leading scorers and also made the All-WBBL First Team with Bailey rewarded for her efforts on the other end of the floor, making the Defensive Team of the Year.

“It feels great to be back in Manchester for another season,” said the guard.

“I think last year we surprised a few people, but this year people will be expecting more from us so we will be facing a different kind of challenge.

“Obviously the Cup Final win was a huge highlight for us last season, but our aim is to bring more trophies to Manchester this year. We have a great core group returning, along with a few new faces and the chemistry is already starting to build.”

She added: “Every team seems to have strengthened their roster this year which is exciting and will only increase the overall standard of the league.

“As for our team, we are all just looking forward to getting the season underway and seeing what this years team is capable of.”

Bailey was still a key contributor offensively, averaging 11.5 points with Thomas-Johnson adding 13.3 points and 6.8 rebounds per game in 10 appearances.

The return of the four players adds to the strong number of leading Brits in the league with the likes of Janice Monakana and Eilidh Simpson joining.