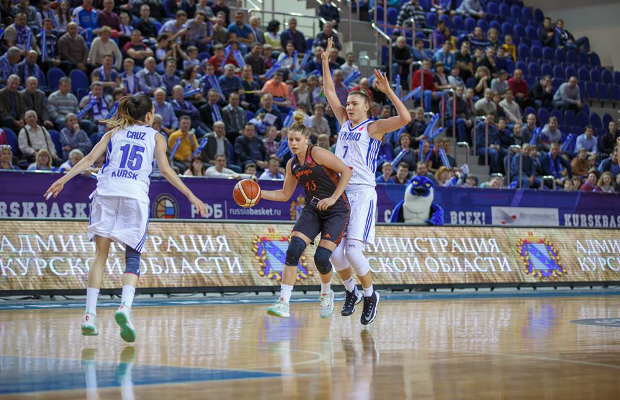 Jo Leedham is preparing for another season in France, but faces a new challenge having signed for ESBVA-LM for 2017-18.

The GB forward joins having spent the past four years at Bourges – notably winning the EuroCup Women title in 2016 and more recently, the Coupe de France.

And, Leedham has begun pre-season with her new team and looking forward to getting the season started.

“I have been here for 2 weeks, and I am really enjoying the new change,” she told Hoopsfix. “I am feeling good and comfortable here which is important for me.

“I’m looking forward to the season – I think we have a team that can be exciting.

“We are quite undersized, but I think if we can come together and click as a unit then we can play some exciting fast-paced basketball.

“We have only been together as a complete team for a few days, but everyone here is a fighter, with a working mentality so it will be interesting to see what we can do this year.”

Leedham averaged 9.4 points, 4.6 rebounds and 2.4 assists in 17 league appearances last season as well as putting up 10.4 points per game in EuroLeague Women.

The 29-year-old has long been committed to the GB Senior side with two EuroBasket appearances as well as starring at the 2012 Olympics in London.

Another new arrival at ESBVA-LM is Serbian guard Nevena Jovanovic to add to the talent of a side that won the LFB Playoffs to culminate the 2016-17 season.

Villeneuve-d’Ascq started in EuroLeague last season before dropping into the EuroCup, where they fell at the quarter-final stage.

Leedham will go up against her former club in EuroLeague Women action this season with the two French clubs drawn in Group A alongside Castors Braine, USK Prague, Sopron, Galatasaray, Dynamo Kursk and a qualifier.

Listen to Leedham speaking about her career on the Hoopsfix Podcast HERE.