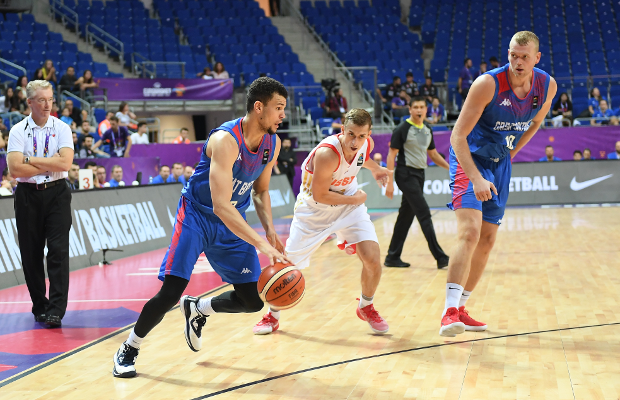 Great Britain Senior Men signed off their EuroBasket 2017 campaign with a fifth defeat as they fell to an 82-70 loss against Russia in Istanbul, on Thursday.

The final score doesn’t reflect how close GB came to upsetting the Russians with another valiant fourth quarter fightback bringing Joe Prunty’s side within one in what was his last game in charge.

Gabe Olaseni has certainly left his mark on the tournament and finished with 19 points and nine boards with Dan Clark putting up a team-high of 21 points, whilst turning provider with six assists.

Gareth Murray was also in double figures with 10 points in one of his most confident offensive displays in a GB jersey.

The Alexey Shved-Timofey Mozgov connection was evident immediately for Russia as they combined for an alley-oop to open the scoring, but GB started well with Clark and Olaseni combining for nine points to help establish an early 11-10 lead.

Russia responded with a 13-2 run capped by back-to-back triples before Gareth Murray ended the first quarter with a deep three with GB trailing 16-23.

Shved continued to pull the strings for his side with 13 points and four assists in the first half as Russia pulled clear through their outside shooting. Andrey Vorontsevich had nine points all from downtown in helping establish a 43-31 half-time advantage with the team going 9-of-17 from three.

Treys from Clark and Murray helped cut the deficit back into single figures early in the third, but Russia continued to find Mozgov inside with ease, while Shved kept his hot-hand going to restore control.

However, GB rallied again and this time with more conviction as they put together a 13-3 spell to close within three as Clark moved to 16 points with a further two triples, the second of which from way downtown.

Mozgov dominated on the offensive glass and scored the final four points of the quarter to earn Russia some valuable breathing space at 61-54 ahead of the last 10 minutes of GB’s campaign.

The gap was down to five through Ben Mockford, but after landing awkwardly was unable to get back on the other end and Vitaly Fridzon was wide-open to knock the down the three to make it 56-64.

That would be Russia’s only basket in the opening five minutes as GB were able to keep up their fight, crucially, at both ends of the floor.

GB were back to within just two points after a 6-0 burst and would soon be even closer as Clark netted five points in a row to make it 67-68 heading into the closing stages.

But, it was time for Shved to take over.

The 2017 EuroCup MVP hit a couple of big threes and six free throws as part of a 12-point blitz to help Russia weather the storm in a dominant finish to give them a flattering final winning margin.

Shved finished with a game-high 30 points along with eight assists with Russia shooting over 40% from downtown as they advance with a 4-1 record.

If there is one thing I can say about #EuroBasket2017 is that our guys never stopped fighting. Proud of everyone of us 🇬🇧. #GBfamily

Five defeats from five for GB, though there have definitely been positives to take forward. The focus turns towards the World Cup Qualifiers that begin in November, under new leadership.