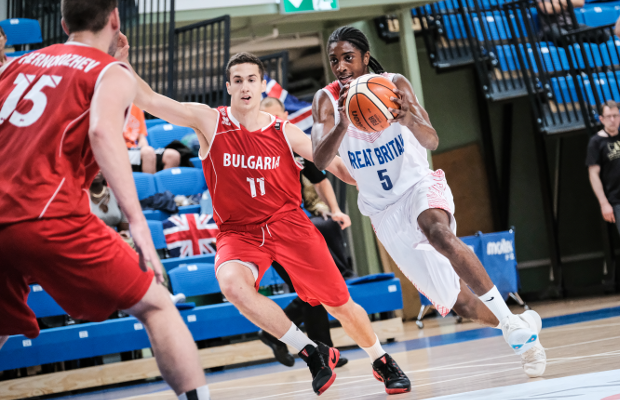 Great Britain Under-18s are now just one win away from promotion to Division A after beating Bulgaria 76-73 in their quarter-final at the European Championships in Tallinn, Estonia, on Friday.

Alan Keane’s saw a 14-point lead in the fourth almost wiped out in the closing stages, but they held their nerve to advance to the semi-finals.

Nelson Boachie-Yiadom stepped up with a big-time double-double with 21 points and 17 rebounds in the win with three other players in double figures.

Bulgaria made a 7-2 start to take early control, but GB responded with a 6-0 run to take their first lead and moved 19-12 ahead on a three from Nathan Robinson.

GB’s lead was cut to three early in the second before putting together a strong finish with an 11-4 run containing five straight from Boachie-Yiadom and a Jacob Round triple to make it 41-31 at the half.

The second half started like the first with GB slow out of the blocks as a 15-2 spell put Bulgaria up 43-46. However, GB hit back with a 9-0 response to restore their advantage, strengthening their position with numerous second-chance points.

Boachie-Yiadom scored eight points in the 19-3 spell and completed his double-double with GB taking a 62-49 cushion into the final 10 minutes.

GB narrowly increased their lead to 14 at 72-58 through inside scores for Boachie-Yiadom and Hosana Kitenge before Bulgaria rallied and managed to cut the gap to a single point inside the final minute with an 8-0 run.

Sesan Russell held his nerve from the line to stop the rot with a pair of three throws to put GB up 76-73 with 16 seconds left on the clock and the win was secured with a crucial final defensive stop.

Keane’s side will now have two chances to emulate the Under-20 side and earn promotion back to Division A with three of the final four teams moving up.

– GB’s starters were Henry, Savery-Richards, Russell, Boachie-Yiadom & Kitenge
– Aiming to become first British U18 side to earn promotion since England finished third in 2012
– Boachie-Yiadom produced tournament-highs in points and rebounds for GB’s second double-double
– GB will face either Poland or Estonia in Saturday’s semi-final, set for 4:15pm