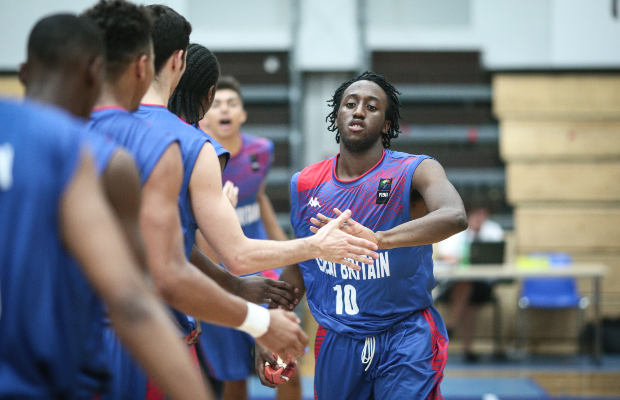 Great Britain Under-18s moved closer to sealing their place in the quarter-finals at the European Championships after beating Luxembourg 91-82 in Tallinn, Estonia, on Tuesday.

Alan Keane’s side pick up their third victory of the campaign and would have had their place in the last eight secured had Sweden beaten Netherlands, but their 88-80 loss means all three teams have a 3-1 record heading into Wednesday’s action.

Kayne Henry poured in 35 points on 15-of-24 shooting, while Sesan Russell added 15 points and six assists.

Nelson Boachie-Yiadom had 12 points with Hosana Kitenge posting a double-double with 10 points and 12 rebounds.

Kitenge scored five points early on as GB raced into a 14-2 start with Henry and Micah Savery-Richards both connecting with alley-oops.

However, Luxembourg proved they were going to be no pushovers as they began to battle back through Ben Kovac as they compiled a 10-0 run before taking a 21-24 lead with two late triples to end the opening period.

GB trailed by as many as five in the second, but gradually restored their advantage with Henry scoring 14 points in the final five minutes to give his side a 48-43 half-time cushion.

The gap returned to double figures in the third as Henry moved past 20 points personal, but Luxembourg rallied again with a 14-4 run and were just three behind at 66-63 heading into the final period.

GB began the fourth with a 6-0 burst and Russell hit a big three to make it 75-68 by the midpoint to keep their opponents at bay. Henry took his tally past 30 before Kaiyem Cleary left his mark with a poster on Luxembourg’s 6’11” centre as GB completed finished strong for the win.

– Russell, Savery-Richards, Henry, Boachie-Yiadom & Kitenge were the starters
– Jacob Round was a DNP again having sustained an injury earlier in the tournament
– Henry’s 35-point haul is the second biggest of the tournament
– GB U18s play their final Group A game tomorrow against Albania at 11:45am UK time
– GB will advance & will top the group with a win unless NED lose + SWE win