GB Under-16s Power into the Semi-Finals 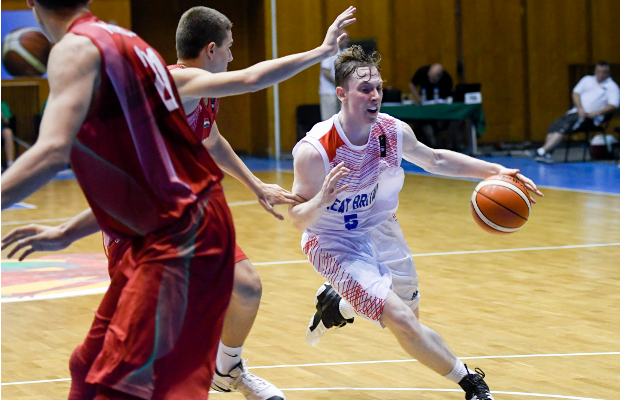 Great Britain Under-16s advanced to the last four at the European Championships with a convincing 85-54 victory over Hungary in the quarter-finals in Sofia, Bulgaria, on Thursday.

James Vear’s side moved through the group phase 5-0 and remain unbeaten as they move to within a win of achieving promotion to Division A.

Also in double figures were Eric Donaldson and Tomiwa Sulaiman with 14 points apiece.

Hungary started with a three for the opening score, but GB quickly asserted their control on the game with a 19-2 run capped by back-to-back triples from Chris Feeney.

GB’s 14-point advantage was cut in half to seven at 23-16 at the 10-minute mark before they quickly restored a double-digit cushion early in the second.

Okros’ triple sparked a 7-0 burst and GB took a 44-30 lead into the half-time break with Feeney into double figures with 11 points.

GB pushed further clear with a strong finish to the third with David Chive and Eric Donaldson coming up with big scores to help stretch the lead out to 18 at 62-44.

There was no letting up in the fourth with a 9-2 start putting GB up by 25 at 71-46 before Sulaiman turned on the style with a dunk through the middle. GB rounded out the win to set up a semi-final showdown with Greece.