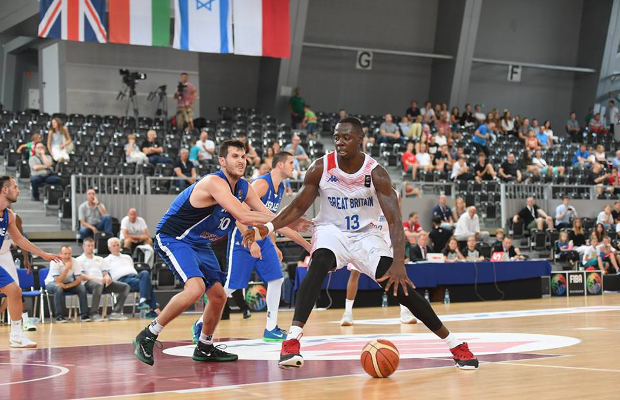 Eric Boateng is set to become GB’s latest capped centurion on Friday when EuroBasket 2017 begins and the veteran centre remains devoted as ever to the cause.

The 31-year-old made his Senior debut back in 2006 against Finland and has been a largely reliable figure ever since.

Boateng recalled the moment he was presented with the chance to make it onto the international scene as the GB Senior side was re-formed over a decade ago.

“I got the call from Radmilla Turner in 2006 saying that I was one of the players who would be invited to train with the GB Men’s team and I was in such shock and awe and excitement.

“I will never forget that day and that feeling has stayed with me every summer and every game since then, but it’s pure euphoria that the National Team wanted me and wanted me to be part of the programme.

“I’ve kept that desire for representing my country throughout this journey and it’s just been incredible honour for me, every step of the way.”

Boateng – who will play in France again next season at St Vallier – brings a wealth of experience to Istanbul having competed at two previous EuroBasket tournaments as well as the 2012 Olympics.

However, the veteran tag on the team in relation to the fresher faces amongst the squad isn’t something he is fully embracing.

“I just try to have a relationship and make it work better in a practice environment. I try to bring that area of comfort.

“Sure, I can give them advice, but they’re learning at their own pace so for me it’s just to be a friendly, upbeat person and that’s very important for the growing process when you go through wins and losses.

“It’s important to have that stable character amongst the group.”

GB picked up three victories (over Ukraine, Hungary & Israel) in preparation with half of the squad – including Kofi Josephs, a late replacement for the injured Carl Wheatle, – set to make their debuts at a major tournament.

Jules Dang Akodo and Luke Nelson are the youngest members of the 12-man squad and Boateng has welcomed how the younger players amongst the squad have applied themselves in the build-up.

“It’s been impressive to see how professional and mature they are,” he commented.

“Sure they’re young, but their attention to detail in practice has been very, very good.

“They have some good habits and some good, key fundamentals – if they just keep working and working with that growth mind-set, the future is promising for us.”

Boateng missed GB’s sole home game of the summer against Greece earlier this month, but returned for the recent prep tournament in Poland as GB impressed for a 2-1 record.

The former McDonald’s All-American has seen the programme evolve over the years and describes being part of the Senior set-up as ‘a rollercoaster of ups and downs’, though nothing can tarnish the sense of pride that comes with pulling on the GB jersey.

“There have been some benefits, but there have also been some trying times,” he admitted.

“Trying to stick through it and it’s not even been just me – it’s been the likes of Dan [Clark], Kieron [Achara] alongside me and all the other players that have been with me from its inception to now, each person has put in their part.

“So I have seen it in different lights, but nothing takes away from representing your country.”

GB’s opening game at EuroBasket 2017 against Belgium takes place at 12:15pm UK time on Friday with all games available to watch via subscription over at livebasketball.tv.