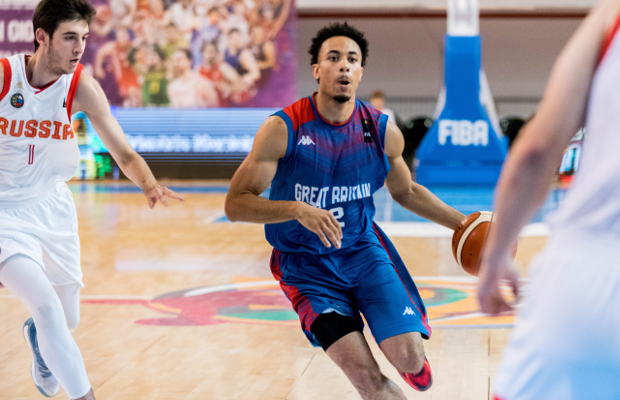 Great Britain Under-20s took a big step towards advancing to the quarter-finals after beating Slovakia 67-53 in Oradea, Romania, on Sunday.

Andreas Kapoulas’ side followed up their win over Russia to improve to 2-1 in Group B ahead of their final game against Azerbaijan.

“We wanted to make our win yesterday count and we did that by producing a solid team performance versus a good Slovakia side,” said Kapoulas.

“It was great to see our players approach in such a consistent manner. We defended very well and got good looks on the offensive end throughout the whole game.

“Now we have a day of rest to recover and prepare for the important game versus Azerbaijan.”

Victory on Tuesday would be enough to secure a top-two finish and make it to the last eight stage.

After a slow start at 0-6, GB began to get going with Carl Wheatle scoring their first points after almost four minutes. Yeboah and Steel both netted from downtown in a 13-2 run as GB started to hit their stride.

An 8-0 run across quarters saw Slovakia close to within two points at 19-17, but Steel knocked down two more triples to move to 13 first-half points before Kyle Carey’s huge throwdown from RJ Eytle-Rock’s threaded assist made it a 10-point game.

Danny Evans beat the buzzer to keep the double-digit advantage in tact as GB headed into the break up 33-23. There was no let up when play resumed with the gap continuing to grow throughout the third.

GB closed on a 6-2 run to take a commanding 52-33 lead into the final quarter. Despite a rallying start to the fourth from Slovakia, the damage had been done and GB were able to round out a resounding victory.

GB U20s play their final Group B game on Tuesday at 2:15pm UK time against Azerbaijan.