GB Under-18s Improve to 2-0 with Another Convincing Win - Hoopsfix.com

GB Under-18s Improve to 2-0 with Another Convincing Win 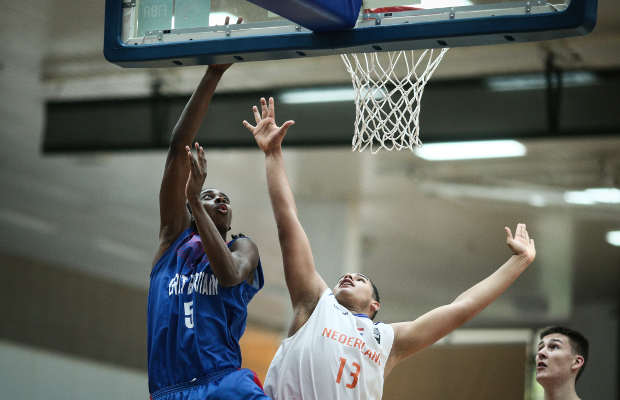 Great Britain Under-18s recorded their second win at the European Championships in Tallinn, Estonia after beating the Netherlands 87-76 on Saturday.

Alan Keane’s side backed up their opening win over Czech Republic with another convincing display as they move to 2-0 in Group A.

Kayne Henry top scored with a 17-point haul with Sesan Russell adding 12 points to go with nine assists, while Nathan Robinson had 11 points and Nelson Boachie-Yiadom finished with 10.

“We grinded out the win,” commented Head Coach Keane. “We are a team are not pleased with how we played for certain periods, however, the most important thing in these tournaments is to win and we did that. We will review and move on to take care of business against Sweden.

“We would like to thanks the support of the families in the crowd last night, they were awesome.”

Henry made a fast start with 10 points including two triples to put GB up 12-7 early on before they pulled further clear with a 13-2 run. Netherlands began to close the gap and a 7-0 run at the start of the second cut the gap to eight at 29-21.

GB turned up the pressure on defence, converting forced turnovers into easy fast-break scores as the lead climbed back into double figures to 45-28 at the half-time break.

Russell and Boachie-Yiadom provided big finishes early in the third as GB maintained their control with Robinson netting back-to-back triples before Brian Amabilino netted from beyond the arc at the buzzer to make it 67-45.

Henry produced another big play at the start of the fourth with Robinson later knocking down his third triple to extend the lead.

Netherlands rallied and enjoyed a strong finish with a 12-0 run to half the deficit, but GB were able to close out their second win of the tournament.

Notes: Henry, Russell, Boachie-Yiadom, Round & Kitenge were the starters

Jacob Round only played 3:53 minutes before hobbling off with an injury in the first quarter.