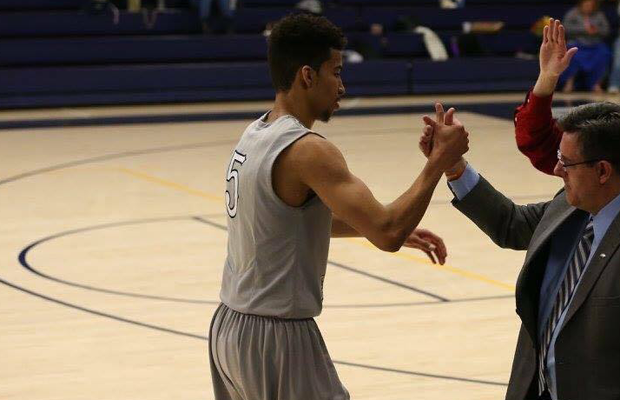 Rolls-Tyson, who hails from Birmingham, makes the rare move after being forced to play out of position at North Dakota following the departure of Assistant Coach Shawn Dirden, who had originally recruited him, for a Division 2 Head Coach job.

“With a reshuffle in coaching staff, unexpectedly I was placed at the 5 position,” Rolls-Tyson, who played JUCO at Utah State Eastern and Cleveland State Community College, told Hoopsfix.

“This was a big blow for me as for the most of my playing career I have played the 3/4. With that said, my experience on the court became very frustrating, through pre-season I did somewhat adapt but felt restricted. Due to this distraction I decided to redshirt, sit a year, train hard, adjust to the culture and hopefully get a transfer by Christmas or next year.

“I’ve known Marco Calise (his agent, from Mansfield Sports) for nearly two years now – he is a great guy who takes pride in his job. I made my goals clear to him early on that I wanted to play overseas, and had faith that he would give me the call when I was ready. I’ve consistently flooded Marco’s inbox with game/practice highlights, stats, media coverage, anything I could get my hands on and it paid off; he offered me the opportunity to play first league in Norway for Kongsberg Miners.”

“I’m looking forward to the goal of helping the Miners win the league title,” Rolls-Tyson added. “I plan to bring a high level of work ethic and experience built up from the states as I’m striving to be a key factor early on.

“I’ve really enjoyed my years in the States. It’s probably been the most challenging but rewarding experience I’ve had thus far. There’s been ups and downs, but for the most part I’ve enjoyed the ride and not only learnt a lot about the game of basketball but also myself.

“I’ve lived in 3 different States and played for 3 different teams all at the highest collegiate level. I’ve been exposed to different cultures and playing styles, met great people and been coached by some really influential and knowledgeable coaches – it’s honestly been a priceless journey.”

Hoopsfix wants to wish Sol all the best with his pro career!