Support
Home / BBL / Raheem May-Thompson on the rise with Phoenix

Raheem May-Thompson on the rise with Phoenix 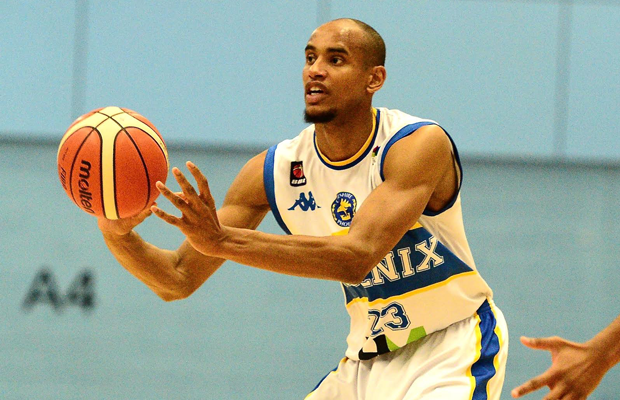 Raheem May-Thompson is relishing the opportunity to showcase his talent in the BBL with Cheshire Phoenix.

The 6’6″ forward has certainly not looked out of place in a bigger role and is currently averaging 12.1 points and 5.9 rebounds per game in 12 appearances so far.

“I’ve known what I can do here at this level of basketball as I’ve been preparing for the professional level most of my life,” he told Hoopsfix.

“The main thing I’ve gotten from my time at Cheshire so far is playing experience in this league.”

May-Thompson had entered his third year at Leicester Riders, but with playing time limited with the defending league champions, he opted for a move further north to join Cheshire in October.

Fellow Brit Jamell Anderson had made the same switch in the summer having been with the Riders for five years before signing with the Phoenix as their new club captain.

A couple of games into the current season and May-Thompson accepted it was time for a new challenge with a chance of proving himself in the league.

“My time at Leicester was a great learning curve,” he reflected. “I was able to be a part of something special.

“Being able to play National League as well as BBL was a great opportunity.

“The main reason for moving teams was just to get more time on the court and show everyone exactly what I can do at this level.”

The former junior international turns 26 next month and is determined to make the most of the chance and build upon the promise shown in his early career that saw him rub shoulders with future NBA stars in the States.

May-Thompson averaged 7.4 points, 5.9 rebounds and 2.4 blocks per game for England Under-16’s at the 2007 European Championships and would later represent Great Britain at Under-20 level, in 2010.

It was after the forward’s strong showing in Macedonia in his first international tournament, when he made the move across the Atlantic to begin his college career.

Victor Oladipo (now OKC Thunder) was a team-mate at DeMatha Catholic High School along with Jerian Grant (Chicago Bulls) and Quinn Cook prior to a year at Towson Catholic before realising his Division 1 dream.

May-Thompson headed to Hamden, Connecticut to attend Qunnipiac University where he played for two years and won the NEC regular season in his first.

“Playing D1 basketball was a dream come true,” reflected May-Thompson. “It was something that I had set out to do ever since I started to play ball.”

During his sophomore year in 2010-11, May-Thompson started 15 of 29 games and finished the season with a career-high 14 points, but another move would follow with Stonehill the final point of call in his college career.

A run to the Final Four of the NCAA Division II Tournament would ensue with the journey curtailed by Western Washington.

May-Thompson returned home to play for Liverpool in the National League out of college before moving to Derby Trailblazers the following year.

“My basketball career to this date has been a great journey,” he reflected. “It has allowed me to travel the world and see things I never would have if I hadn’t ever picked up a basketball.

“I started playing organised basketball at the age of 13 for the Toxteth Tigers and things have gone from there.”

Cheshire’s season has yet to hit the ground running and currently in transition following the departure of Head Coach Colin O’Reilly, while Josh Wilcher was recently ruled out for the rest of the campaign.

A number of changes have been made in an effort to change their fortunes and with a BBL Trophy Quarter-Final in the coming weeks, there is reason for optimism.

“It’s been difficult at times with how much our roster has changed,” admitted May-Thompson.

“I’m hoping we gain an identity as a team and find our own brand of basketball.

“We know we have enough talent to beat any team in this league, that win [against Glasgow on BBC] just validated it for us all. We know we can play better basketball.”

May-Thompson is aiming for a solid finish to the season on a personal note with future ambitions of branching out into Europe.