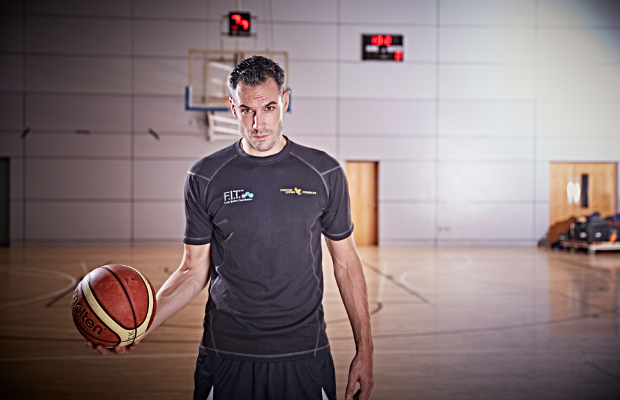 Following a summer that has seen the BBL bid farewell to four household names – Mike Tuck is still going stronger than ever for the Sheffield Sharks.

Tuck has helped the Sharks win four trophies in his time at the club with whom he joined almost seven years ago.

“I remember it like it was yesterday,” he recalled.

The Toronto-native hopped on a London-Sheffield train on a cold winter’s night, headed to the EIS for practice with the aim of making an impression – and he did.

All it took was a single session for Atiba Lyons to be convinced, and the rest is history as Tuck returned to London to collect his stuff and has been in Sheffield ever since.

The preluding tale that would lead up to his move was one of the harsher lessons he has experienced in basketball – a victim of the cut-throat nature of European recruiting.

“I was playing in France, for Châlons-en-Champagne (then NM1 now Pro-A) and the team was having a terrible run,” he explained.

“I ended up being the scapegoat and was released not long into the season.

“I had family living in London at the time so decided to fly in and wait until another job.

“Within a week, I got an email from Atiba; inviting me up for a workout and I’m so glad I went.”

Tuck has gone on to play in over 200 league games, whilst amassing 3,000+ points for the club since making his league debut in December, 2009.

Within two months of joining the club, he was already a title winner after scoring 15 points to help the Sharks to victory over Cheshire Phoenix in the BBL Cup Final, in Birmingham.

“I couldn’t have walked into a better situation, ” he admitted.

“All these years later – I’ve been through so much – won a few more Championships – and the club has been a huge part of my life.”

Tuck was a bright prospect as a junior in his native Canada and was coached by George Kraus at Markham District High School, where he played alongside Chris Kraus (who has recently become the first Canadian Head Coach at NCAA level with Stonehill College).

A U.S scholarship later followed as Tuck began his college career at Loyola University Maryland in 2003 and despite being hampered by injuries, still enjoyed success having picked up the MAAC’s Sixth Man of the Year award in his junior year.

And Tuck reveals that it was at the mid-major school, where he embraced the underdog character that has paid dividends in certain moments of his career, including the 2013 BBL Trophy Final in which Sheffield stunned Leicester Riders to take the title.

“Loyola was a smaller school playing in a mid-major conference and the biggest thing to come out that experience for me was the fighting spirit.

“Head Coach Jimmy Patsos [now at Siena] continually drilled that into us – that underdog mentality – fighting for every loose ball and every possession like it’s the last.

“The Trophy Final in 2013 was such a big moment for me because nobody gave us a chance of winning that day and I’ll always remember that feeling.”

It was while he was at Loyola that Tuck obtained his British passport (through his mother being born in England) in an effort to drive his ultimate goal of turning pro. That passport would also help him pick up five caps for the England Senior Men’s side later down the line.

Stints in Cyprus and Luxembourg would be the start of Tuck’s professional career and his experiences – particularly the aforementioned spell in France – make the long time spent at the Sharks feel even more special.

“Turning pro was when I realised that basketball is a business. Players are expendable and winning is the ultimate thing – I learnt that very quickly.

He added: “It definitely makes me more proud to have been with Sheffield all this time.

“Some guys have a really great year then go elsewhere and don’t want to stay then their careers kind of fizzle out.

“I feel extremely fortunate that I was able to come to Sheffield and build a great relationship with the management team and Atiba.

Tuck has been a consistent performer in the BBL; scoring at least 450 points in six full seasons – and even managed to post his highest tally in the 2015-16 campaign after surpassing 500 points for the first time.

That has been whilst – since 2014 – combining playing duties with a day-job at law firm, Wosskow Brown Solicitors, but Tuck admits it’s not always been easy to juggle the two worlds.

“At the beginning, it was very tough to balance both. I’ve learnt how to now, but initially, my game struggled on the court through not managing my time.

“Now, I go into work focussed on my tasks, then when I leave and head to the gym, my mentality changes.

“It’s like the Clark Kent moment when he goes into the phone booth and comes out as Superman.”

Tuck has been somewhat of a superhero himself to the Sharks fans in recent years and propelled the club to a memorable victory in the BBL Playoff Final at The O2 Arena earlier this year – with an MVP winning performance of 20 points, 13 rebounds and four assists.

The 33-year-old has shown great loyalty to the club with a decade of reliable, dedicated service now in sight. Being smarter in managing his minutes and the use of ‘Forever Living’ supplements have helped his longevity while the desire to win more silverware shows no signs of waning.

“The club has always been very good to me,” he enthused. “The fans are always so friendly and kind – I like the city, I’ve met great friends and my girlfriend.

“I’ve had a few offers along the way but the club has always made it so easy to keeping saying yes.

“I feel like I’ve made the right choice by keep coming back and have cemented myself as a player who will go down in history at the club.”

He added: “I’m still motivated by winning Championships – winning the Playoffs and getting MVP – there’s no greater feeling.

Tuck is in the second year of a three-year deal signed last summer to take him into his eighth season, but he won’t be battling against the likes of Barry Lamble, Anthony Rowe, David Aliu and Charles Smith this season.

The retiring quartet have had their achievements celebrated this summer, but how would Tuck like to be remembered when the time eventually comes to call it quits?

“I’d like to be remembered as a guy that left it all on the floor,” he mused. “Someone who played with his heart on his sleeve and gave it everything he had.

“You never know [how long you will play for] – I used to say I’d play until my legs fell off.

“I’m in my eighth season in the BBL, and I’d love to get to my 10th season – that would be a big milestone for me.

“I may even play a couple of more seasons after that.”

The Sharks start the new season with a double-header against Leicester Riders and Leeds Force.