Jacob Round ('00) Signs with Fuenlabrada - Hoopsfix.com

Jacob Round (’00) Signs with Fuenlabrada 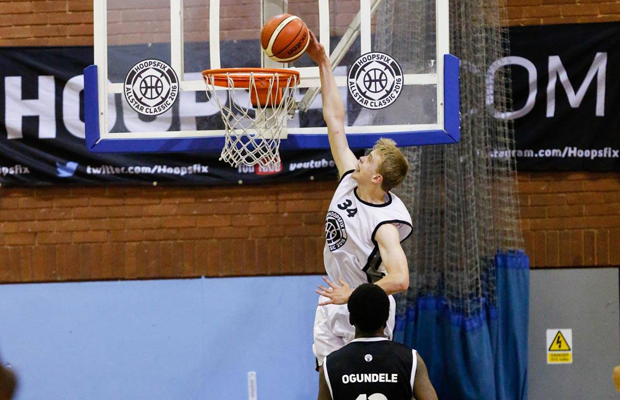 England Under-16 and top rated 2000 born prospect Jacob Round will be plying his trade in Spain next season after signing with ACB side Fuenlabrada.

Following an impressive summer with the England Under-16s where he averaged 14.9 points, 3.9 rebounds and 2.8 assists per game, the NEBC Titans guard becomes the latest Brit to take the European route, following on most recently from Kareem Queeley who signed with Real Madrid last season.

“I feel very excited to have signed with Fuenlabrada,” Round, who will play for the Fuenlabrada Under-18 and EBA (Spanish men’s fourth division) squad this season, told Hoopsfix.

“They had a great season last year in the ACB reaching the playoffs so this is definitely a high performance program.

“I decided to go to Fuenlabrada because they give me the opportunity to challenge myself by playing against high quality opposition in the Madrid area such as Estudiantes and Real Madrid.”

Round headed to Spain two weeks ago, and has already found success, winning a pre-season tournament with the U18s against the likes of Estudiantes, Torrelodones and TBS Academy last week.

“My early experiences have been very promising,” he enthused. “I have had daily sessions including strength and conditioning sessions, team practices and pre-season games which have allowed me to get use to the style of play and understand the coach’s expectations of me.”

The 6’2″ guard will be studying the Spanish Baccalaureate at a local school, as he looks to immerse himself learning the language, for which he has already studied in England.

“While I have studied Spanish I will still need to do a lot of work to be accustomed to the language,” he added.

“However, I am really looking forward to the challenges that lie ahead.”

Round, who played in this year’s Hoopsfix All Star Classic and finished ranked number 7 at the Deng Top 50 camp, received interest from a number of academies in England as well as other clubs in Europe.

“Jacob is a very talented player particularly due to his work ethic, commitment to himself to get better combined with his level of concentration and attention to detail,” said England U16 Head Coach Alan Keane.

“Jacob is an extremely valued national team player who captained this year’s U16 squad, as well, if not better, than anyone in the past. His leadership on and off the court shows he is mature beyond his years and this translates to his technical and tactical ability on the floor. I have no doubt that Jacob will maximise each and every opportunity in Spain to grow his game. I am looking forward to monitoring his development and excited for his future.”

Hoopsfix wants to wish Jacob all the best with the next step in his career!