England U18s Round Out Group Phase with Albania Win - Hoopsfix.com

England U18s Round Out Group Phase with Albania Win 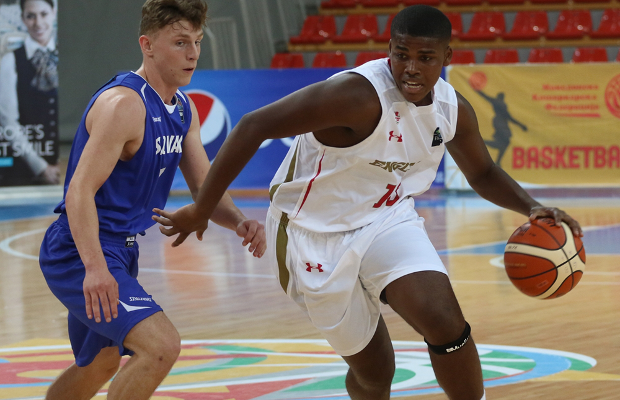 England Under-18’s claimed their second win in as many days at the European Championships in Skopje, Macedonia, after defeating Albania 83-42 on Wednesday morning.

Steve Bucknall’s side complete Group D with a 2-3 record – finishing in fourth – and now play for a best possible finish of ninth place in the next classification round.

Carl Wheatle led the way with 12 points and seven rebounds, while Zion Tordoff joined his team-mate on 12 points. Adding further scoring support were the trio of Luke Mitchell, RJ Eytle-Rock (pictured) and Brian Amabilino, who had 10 points apiece.

The teams were tied at 8-8 before England closed the opening quarter with the final five points and never looked back in the contest.

Albania were within three points at 13-11, but a dominant 18-3 run including triples from Amabilino and Wheatle put their side firmly in control. Tordoff would add a 3-pointer of his own to end the half with the score 46-20 in England’s favour.

Wheatle opened the second half with another score from downtown as the lead continued to grow with England taking a commanding 63-30 advantage into the final quarter.

With the game already virtually secured, England were able to rotate with the likes of Romario Spence, Josh Apple and Dan Akin all getting in on the scoring action.

A convincing victory was wrapped up with the winning margin beyond 40 points for the second day running.

England shot above 50% from the field including 7-of-13 from 3-point range and out-rebounded their opponents 42-28.

England U18s are next in action on Friday at 8pm UK time as they play the third-place team in Group C – later confirmed as Iceland.