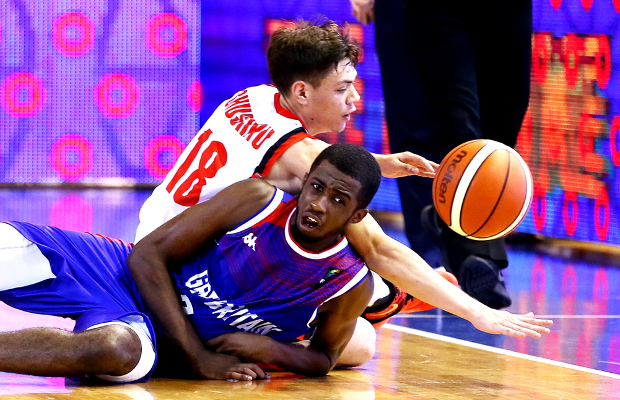 Great Britain Under-20’s claimed their second win in as many days at the European Championships after defeating Ireland 66-56 in Group C, on Saturday, in Chalkida, Greece.

Andreas Kapoulas’ side improve to a 2-0 start in their Division B campaign with three games still to play in their group as they target a top-two spot to advance to the quarter-finals.

Kyle Carey caught fire in the fourth with a trio of triples after GB’s early struggles, and he finished as top scorer with 18 points, while Jules Dang Akodo added 14 points, nine rebounds and four assists and Deane Williams weighed in with 11 points in the win.

Dang Akodo scored the first four points of the game and was able to find his way to the basket with ease in the opening period with eight points in total.

Ireland quickly found their range from beyond the arc with back-to-back triples as they opened up a four-point lead. Andre Arissol finally got a three to go for GB – after a 0-7 start from downtown – to give his side a slender 19-18 advantage at the end of the opening quarter, capping a 5-0 close.

Ireland moved ahead with a mini 6-0 burst in the second, but Dang Akodo continued to find success driving at the opposition’s defence and moved into double figures as GB quickly restored their advantage with their one-point lead from the first remaining intact at 33-32 going into the interval.

Carey helped extend the gap to six points with the first three points in a 5-0 start to the third from GB with their opponents held scoreless for the opening three and a half minutes.

Arissol converted a tough and-1 play and GB would lead by as many as seven points after a bright spell that included a two-handed throwdown from Williams, but would take a 49-44 lead into the final period.

Carey netted just GB’s second 3-pointer in 21 attempts at the start of the fourth and then added two more to make it a nine-point game at 59-50 with just over four minutes left on the clock.

Ireland hit back with two quick scores to narrow the gap, but Callum Lawson responded with a three of his own and GB were able to see out the result in the final minute with Williams moving into double figures with an emphatic finish to complete a 10-point victory.

GB finished 5-of-27 from 3-point range and went to the line for 37 free throw attempts, making 21, whilst again winning the rebounding battle (52-45).

GB are in action again tomorrow (Sunday) when they take on Kosovo, who were beaten in their tournament opener, at 10am UK time.