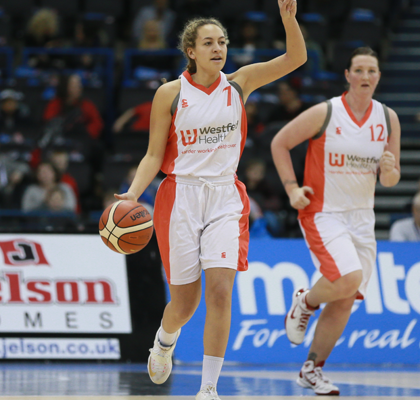 Westfield Health Sheffield Hatters’ rising star Georgia Gayle has taken the honour of being crowned the Molten WBBL Young Player of the Year for 2015-16.

The England youth international has blossomed this season and stepped up for her team – evidenced by the fact that she has appeared in the weekly All Star Five more times than any other U20 player or fellow teenager.

Gayle has already won the WBBL Trophy and is hoping to help the Yorkshire side reach the Molten WBBL Play-Off Final at The O2 Arena on Sunday 08 May, after Hatters secured their place in the Semi-Finals over the weekend.

Averaging 10.1 points, 3.4 rebounds and 2.1 steals per game after appearing in all 16 of her team’s WBBL Championship fixtures, Gayle takes the torch from last year’s inaugural winner of the award, Savannah Wilkinson of Barking Abbey Crusaders who finished second on this season’s podium.

Kyla Nelson of Brixton Topcats took third place in this year voting which was undertaken by all WBBL coaches.