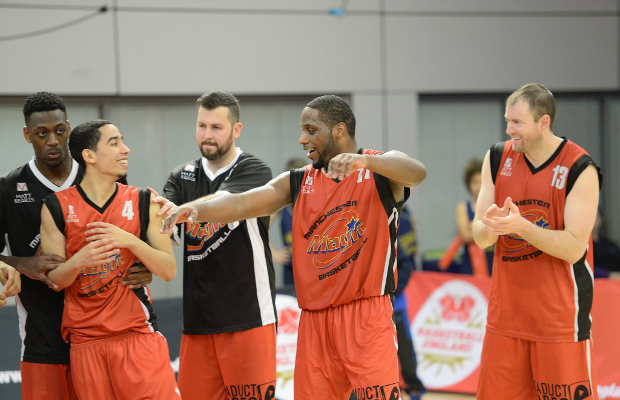 The regular season has come to an end in the NBDL, but there is still plenty to play for in Divisions 1-3 with the focus firmly on the playoffs.

Manchester Magic (20-1) are now just two wins away from securing the D1 title after they recorded two more wins on the road. Paul Middleton’s side pulled away late on to defeat Hemel Storm (16-7) 82-102 with Ellis Cooper netting 27 points, before following that with 31 as Magic edged past Leicester Warriors (9-13) 74-77 having trailed at the end of three.

Reading Rockets (17-5) increased their winning run to nine games in the league, and did so without injured captain Danny Carter. The Rockets narrowly saw off Team Northumbria (14-7) 67-66 on Saturday after battling back from nine points down at half-time, before defeating London Lituanica (14-9) 74-81 on the road, the next day with 22 points coming from David Ajumobi.

Meanwhile, Essex Leopards (13-9) inflicted a 74-63 loss on Northumbria to make sure of their spot in the post-season with Albert Margai leading the way with 13 points and seven assists as 12 players got onto the scoreboard for the hosts. Also, Leicester went into their game with Manchester full of confidence following an 82-90 success at Westminster Warriors (4-19).

Derby Trailblazers (18-5) claimed a 78-66 win at home to Lancashire Spinners (13-9) with David Watts scoring 21 points to keep his side in second. The Spinners bounced back from the loss to beat Worthing Thunder (7-16) 72-70 with Connor Murtagh leading a strong fightback with 17 points, 13 rebounds and seven assists to counter James Cambronne’s dominant effort of 27 points and 10 boards.

Worthing had been victorious the day before after seeing off Bradford Dragons (6-18) for a 78-87 road win, while Kent Crusaders (2-20) were beaten 71-92 at home to Tees Valley Mohawks (3-19) as Joel Madourie netted 26 points to boost his side’s survival hopes.

Solent Kestrels (17-4) remain clear at the top of D2 as things stand following their 73-83 win away at Ipswich (12-9) on Saturday with Louie Kirkman leading the way with 21 points. Loughborough Student Riders (15-3) have games in hand, and more importantly, fewer losses and they continued their charge with a double-winning weekend over London Greenhouse Pioneers (15-6) after winning 55-61 on the road before defending home court with a more convincing 65-49 success.

Nottingham Hoods (15-6) did the home and away double against Worcester Wolves II after winning 60-90 on Saturday before following their road success with a 94-63 triumph on home court. Elsewhere, Timmy Shodipo had a monster weekend for East London All Stars (12-8) with 39 points in a 95-99 road win at Liverpool (10-9), before scoring 34 to lead his side to a 67-83 victory at Eastside Eagles (2-18).

Also, Brixton Topcats (6-13) earned an impressive 65-73 win at Derbyshire Arrows (11-9), but then fell to a 59-53 loss away at London Westside (2-16) on Tuesday with the hosts doubling their win count for the season. Eastside had beaten London Westside 69-59 at the weekend.

Team Newcastle University (19-0) wrapped up the D3 North title as they closed on another ‘perfect’ regular season after beating Mansfield Giants (7-13) 78-93 on the road prior to an 85-73 victory over Derby Trailblazers II (6-13) with Tayo Oyefusi dropping 32 points. Doncaster Danum Eagles (15-4) are already guaranteed to finish second, and they claimed a 59-69 victory at Sefton Stars (11-8) at the weekend.

In D3 South, Thames Valley Cavaliers (19-0) are also closing on an undefeated regular season as they defeated Oxford Brookes University (14-8) 112-96 in a repeat of the National Shield Final. Abdoulaye Sylla netted 43 points in the loss, having scored 38 the day before to lead his side to a 98-71 victory against Loughborough Riders (7-14). On Sunday, Brunel Ducks (14-7) moved into second with an 81-65 success over Barking & Dagenham Thunder (5-16) as Benji Lawmann poured in 26 points.

Sheffield Hallam Sharks (9-3) rounded off the regular season in the North-East with a 71-57 victory over Nottingham Hoods II (5-7) as Sam Van Oostrum netted 22 points. Gateshead Phoenix (11-1) were the division winners, and advance to the Playoffs as the top seeds with the Sharks and Sheffield Sabres (8-4) also making it into the post-season.

In the North-West, University of Chester (14-2) were already handed a 20-0 victory against Carlisle Panthers (1-15) as they advanced as the third seeds in the NBDL with Preston’s College Titans (13-2) and Blackburn College Spinners (13-3) following them through.

The regular season had already been completed in the South with Sussex Bears (10-2) progressing as division winners to take the #4 seed in the playoffs, while Thames Valley Cavaliers II (9-3) and Kent Crusaders II (7-5) also made it.

Cardiff Met Archers (15-5) ensured they advanced to the playoffs as the top team from the South-West after recording back-to-back wins; beating Cardiff City (12-8) 66-76 on the road prior to a convincing 99-63 victory over Sporting Club Albion (12-8), although they then lost the reverse fixture 88-68 with Albion snatching the final playoff spot.