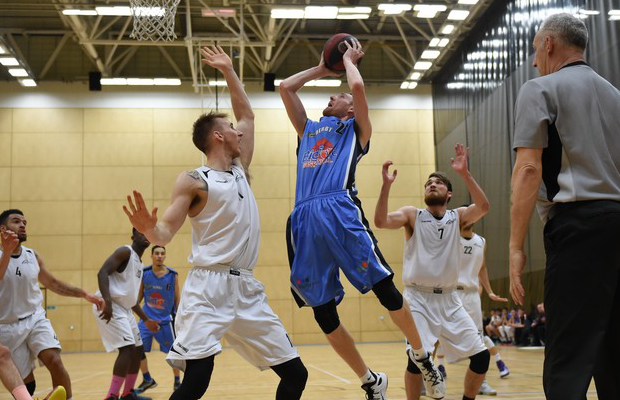 Check out the latest NBL round-up from D1 all the way down to the NBDL as teams across the leagues fight for playoff spots and league titles.

Manchester Magic (18-1) made it 11 league wins in a row as they moved a step closer to securing the D1 title with a 71-81 win away at Team Northumbria (14-5). Ellis Cooper led the way with 24 points and 18 rebounds, while Jack Minister added 22 against a side in which some players had already been involved in a BUCS semi-final on the same day.

There were wins for the chasing pack, led by second-placed Derby Trailblazers (17-5) who recorded a 78-83 win away at Tees Valley Mohawks (2-18) without the services of brothers Dan and David Watts. Reading Rockets (15-5) claimed two victories as they saw off Worthing Thunder (6-15) 73-78 away from home, before beating Bradford Dragons (6-17) 74-68 at home with D’Montre Edwards scoring 21 points in each encounter as captain Danny Carter picked up an injury.

Worthing also suffered a second home defeat of the weekend after falling to a 70-80 loss against Hemel Storm (16-6) as Nik Rhodes and Bode Adeluola scored 21 points apiece to help cancel out James Cambronne’s game-high effort of 27 points. Also, Lancashire Spinners (12-8) were led to an 88-82 victory against Bradford by Steven Gayle, who netted 28 points including a composed 9-of-10 from the free throw line.

London Lituanica (14-8) avenged a defeat to Essex Leopards (12-9) earlier in the season after they carved out a 48-51 success at the Brentwood Centre with both teams held to less than 30% shooting from the floor. Elsewhere, Westminster Warriors (4-18) edged out Kent Crusaders (2-19) 77-74 behind Mike Martin’s 27-point, 10-rebound double-double, while Leicester Warriors (8-12) also defeated Kent with Theo Rothstein netting 25 points in a comfortable 87-65 home triumph.

D2 leaders Solent Kestrels (15-4) suffered a 75-66 defeat away at Nottingham Hoods (13-6) on Saturday as Miguel Lorenzo Leis put up 26 points and 16 rebounds to lead the hosts. London Greenhouse Pioneers (15-4) moved level with Solent after edging past Ipswich (12-8) 72-70 the following day, with the top two also handed 20-0 victories as Worcester Wolves II (2-16) forfeited their weekend fixtures.

Nottingham followed up Saturday’s success with a convincing 93-53 victory at home to Eastside Eagles (1-17) as Alvaro Guerra-Urbistondo netted 29 points. Prior to their defeat on Sunday, Ipswich had claimed an 85-67 victory against Brixton Topcats (5-12) with Sam Newman top scoring with 19 points as five players hit double figures.

Elsewhere, Liverpool (10-8) opened their road encounter on Saturday with an 18-2 first quarter on their way to a 51-69 triumph at Eastside, while East London All Stars (10-8) defeated Derbyshire Arrows (11-8) 85-79 behind Taner Adu’s 22 points. Denis Scott led the visitors with 27 points and 10 rebounds in the absence of Joseph Baugh.

Doncaster Danum Eagles (14-4) picked up two victories in D3 North this past weekend as Matthew Martin racked up 51 points for his side. First, the Eagles defeated Leeds Force Academy (1-16) 88-74 with Martin and Oliver Hylands scoring 27 and 25 points respectively, before seeing off Myerscough College (7-11) 59-90 on the road, the next day. Team Newcastle University (16-0) remain clear at the top, and were handed a 20-0 victory by Leeds on Sunday.

In D3 South, Thames Valley Cavaliers (18-0) maintained their impressive unbeaten record after recording a 112-80 victory at home to Northants Thunder (8-13) with Phillip Perre netting 33 points. Brunel Ducks (13-7) were guided to a 68-99 success away at Middlesex LTBC (11-8) by Benji Lawmann’s 34 points as they moved into joint second.

In the North-West, Calderdale Explorers (8-8) claimed a 72-89 victory away at Manchester Magic II (8-8) with Nat Akins dropping 35 points in the win. Meanwhile, Blackburn College Spinners (13-3) picked up a 20-0 forfeited win over leaders University of Chester (14-2), who would return to action on Tuesday evening to beat Liverpool II (3-13) 49-90 on the road.