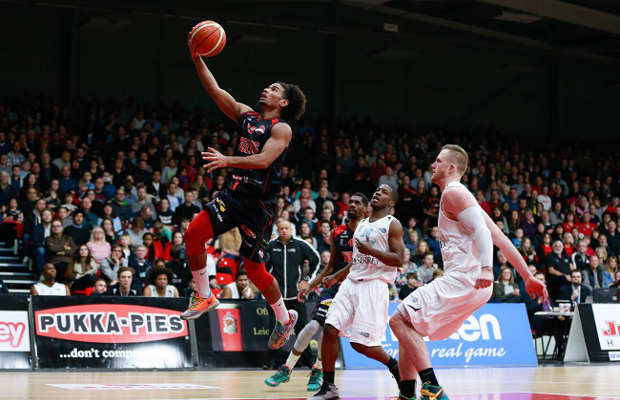 Leicester Riders enjoyed an almost perfect weekend as they defeated Newcastle Eagles in the league before opening their impressive new arena with victory over Surrey Scorchers in the BBL Trophy quarter-finals.

Rob Paternstro’s side avenged their recent Cup Final defeat at the hands of the Eagles by inflicting a second straight loss on the league leaders with a 73-85 triumph at a sold-out Sport Central on Friday night. Neil Watson dished out nine assists to go with 21 points as the Riders ensured they would not surrender a double-digit advantage this time around as they now gain.

On Saturday, Drew Sullivan top scored with 14 points to go along with seven boards as Leicester overcame a nervy start to beat Surrey 77-60 in the Trophy to open the Leicester Community Sports (LCS) Arena with a win. KC Ross-Miller led the visitors with 23 points as their poor run continued.

Sheffield Sharks took their winning streak to double figures this weekend after claiming successive wins over Plymouth Raiders. Firstly, Atiba Lyons’ side held on for a 74-68 win in the league before powering their way to a 73-99 success on the road to reach the semi-finals of the BBL Trophy. Mike Tuck put up 28 points and had nine rebounds in Sunday’s triumph as the Sharks used an 18-3 run in the first to pull away, and never looked back. On Friday night, TJ Robinson had 24 points and 14 rebounds with Jerrold Brooks adding 21. Player-coach Daryl Corletto top scored for his side in both defeats with 19 points and 10 boards followed by 17 at home.

Worcester Wolves also made light work of their BBL Trophy quarter-final after comfortable 85-66 win at home to Glasgow Rocks in a repeat of the 2014 final. Pavol Losonsky led from the front with 26 points and 10 rebounds with Perris Blackwell adding 15 from the bench. The home side racked up 54 points in a dominant first half that set the platform for their victory having seen Friday’s scheduled league fixture away at Leeds Force postponed after being involved in a road traffic accident en route.

The Rocks were also beaten at home on Friday night as Cheshire Phoenix came away from the Emirates Arena with an 87-97 victory. Danny Huffor exploded for 28 points against his former side, whilst adding nine rebounds and six steals with Kinu Rochford also filling the stat-sheet with 18 points, 16 rebounds and seven assists. The Rocks were led by 22 points apiece from Kieron Achara and Warren Gillis as they were unable to hold on to their slender half-time advantage.

Cheshire had the chance to make it a double-winning weekend, on home court on Sunday, but they suffered a 70-76 defeat to the London Lions. Alex Owumi netted 20 points in the win as the visitors claimed the head-to-head between the two sides. Demond Watt had 15 points and 12 rebounds against his former team as they withheld a late fightback as Phoenix cut the gap from 14 points to 3 in the fourth, before falling short. Akeem Ellis finished with 26 in a losing effort.

Bristol Flyers moved into the playoff places on Sunday after defeating last season’s fellow newcomers Leeds Force 88-67. The home side came out flying and racked up an impressive 37 points in the opening period, shooting above 70% from the floor and never looked back. Cardell McFarland flirted with a triple-double after finishing with 23 points, eight rebounds and nine assists in the win. For Force, it was a fourth consecutive loss with Louis Sayers top scoring with 17 points in the absence of star forward Rob Marsden.