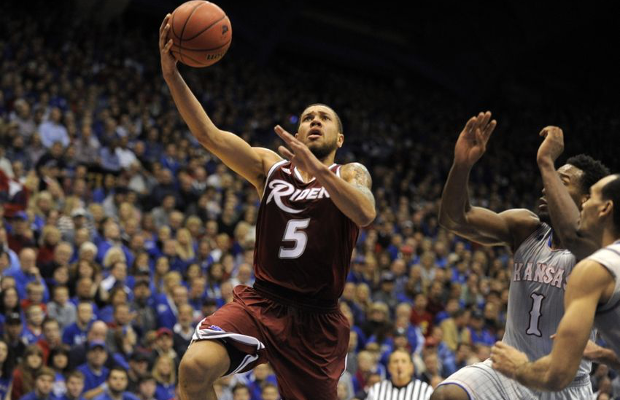 Teddy Okereafor inspired Rider to their first Metro Atlantic Athletic Conference of the season after exploding for a career-high 38 points, aided by a record 25 made free throws from 30 attempts. The senior guard scored nine of Rider’s 10 points in double overtime to secure a 102-100 victory having also contributed seven rebounds and eight assists in an incredible 40-minute effort.

“That was fun,” he said, post-game. “We’re a resilient team and we really wanted to win this game.”

In his previous game, Okereafor had finished with 14 points and six boards as Rider fell to a fifth straight loss in the MAAC, suffering a 64-69 defeat at home. With Thursday’s double OT win, Rider are now 1-5 in MAAC play and 5-12 on the season.

Luke Nelson also went off for a career-high this week after netting a 29-point haul on 10-of-15 shooting from the floor including four triples in an 84-68 win for UC Irvine. The junior guard then scored 11 points in his next outing as another success for UCI made it three straight victories in the Big West.

Ben Lawson had a big game for Western Kentucky after contributing 11 points, seven rebounds and five blocks to an 86-82 overtime win, before the Hilltoppers were beaten in their next game to drop to 9-8 on the season.

Elsewhere, Jesse Chuku was one point shy of a double-double after finishing with nine points and 10 rebounds in a 65-50 road win for Lehigh, before a display of eight points and six boards in a following 76-82 loss in the Patriot League.

Jack Crook scored 12 points and collected six rebounds in a 66-50 win on the road for Seattle, while Dwayne Lautier-Ogunleye had seven points and five assists in a 54-53 win for Bradley – their first in the Missouri Valley Conference following a heavy 67-35 defeat.

Senior forward Ryan Martin had six points and nine rebounds in a 72-66 road win for Tennessee Tech before putting up 22 points on 9-of-13 shooting along with nine rebounds as the Golden Eagles were beaten 96-90 for their first Ohio Valley Conference loss.

Prince Ibeh didn’t miss a shot in his six points as Texas suffered an agonising 58-57 loss, before grabbing five boards to go with four blocks and two points in a following 94-91 win over Iowa State in the Big 12. Teslim Idris was also in action and had six points and four boards in a 75-68 win for Savannah State to improve to 1-1 in the Mid-Eastern Atlantic Conference.