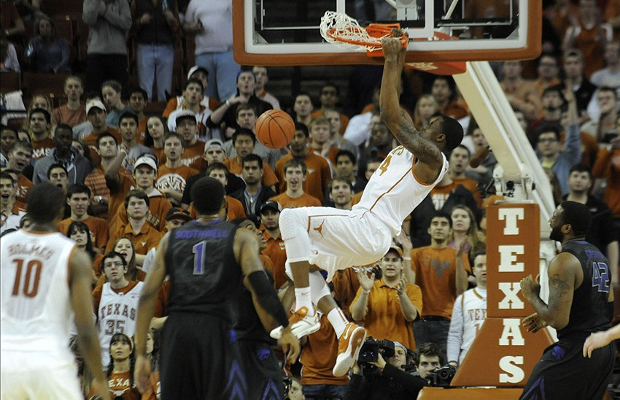 Prince Ibeh had a career-night in leading Texas to a 71-54 win over TCU after recording his second double-double with a career-high 17 points along with 10 rebounds and five blocks. In the absence of his team’s starting centre, Ibeh has stepped up and seized his opportunity to impress.

“Early on, I didn’t play many minutes, so if I went out there, I was timid and didn’t want to mess up,” said London-born Ibeh. “Now that I know I’m out there no matter what and I’m depended on, I’m just getting more and more comfortable.”

Ibeh had gone into Tuesday’s game shooting 3-of-14 at the line for the season, but held his nerve to convert five of his six free throw attempts, whilst shooting 6-of-11 from the floor in his 17 points.

The 6’11” centre also produced an all-round display for the Longhorns against the number-3 ranked Kansas after finishing with seven points, seven boards and seven rejections in a valiant 76-67 loss on the road.

Teddy Okereafor dished out five assists to go with 10 points in a 75-52 win for Rider, before scoring nine in a following 45-76 success on the road at St Peter’s to help his side improve to 4-6 in MAAC play and 8-13 for the season.

Junior guard Luke Nelson helped UC Irvine remain unbeaten in the Big West after scoring 14 points and adding eight assists in a 63-73 victory to make it 6-0 in conference play and seven straight in 2016. Alex Young pulled down seven rebounds to go with three points and a couple of assists.

Ben Lawson didn’t miss a shot in his 14 points after going 4-of-4 from the floor and making all six free throws in a 69-62 victory for Western Kentucky as they ended UAB’s NCAA-best 14-game win streak for their third win in eight in C-USA.

Another big man putting up solid numbers again this past week was Jack Crook after the senior forward scored a combined 30 points in back-to-back wins for Seattle. Crook went 8-of-12 for 16 points in a 70-59 success, before scoring 14 in a following 62-73 victory. Aaron Menzies weighed in with five points and eight boards as well as eight points and six rebounds in the two wins.

Ryan Martin dished out a career-high four assists to go along with another double-double of 17 points and 14 rebounds to lead Tennessee Tech to a narrow 81-79 win for a 7-2 mark in the Ohio Valley Conference. The senior forward was a rebound shy of two double-doubles for the week having finished with nine boards and 15 points in a previous 83-89 triumph.

Meanwhile, Jesse Chuku netted three times from downtown in a 13-point haul to help Lehigh to a 79-70 win. Dwayne Lautier-Ogunleye hit double figures with 10 points and six assists in a heavy 88-54 defeat at Wichita State with Bradley now dropping to 3-19 for the season, while Grant Fiorentinos tallied eight points in a 70-54 loss with SIUE suffering their 16th defeat in 20.

Elsewhere, Jordan Spencer matches his career-high as Augustana are ranked number 1 for the first time, while Kavell Bigby-Williams continues to attract interest from big D1 programmes.