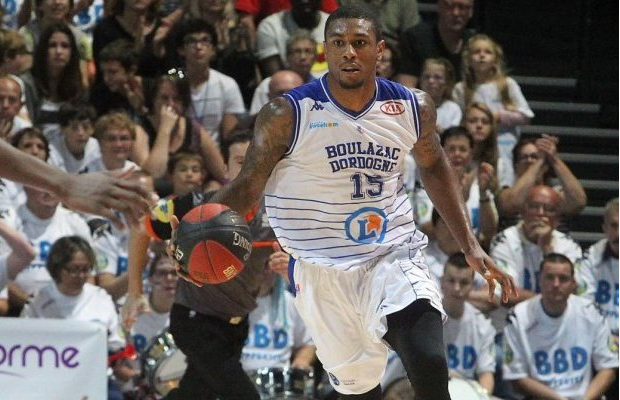 Luol Deng began his second season with Miami Heat this past week as they made a 2-1 start to the new NBA season. The two-time All-Star scored 13 points in Miami’s opening 104-94 win against the Charlotte Hornets and had 14 points and six rebounds in a 109-89 win over Houston Rockets.

In Mexico, reigning league MVP Matthew Bryan-Amaning led Club Soles (3-1) to their third win with 23 points and five rebounds in a 91-98 overtime win on the road having suffered a first loss a couple of days before, while Aaron Geramipoor added five points in nine minutes.

Ovie Soko (pictured in action with Boulazac last season) had another impressive game in the Greek top-flight as he scored 21 points and added four rebounds as well as two blocks. Fellow Brit Justin Robinson chipped in with 13 points on 4-of-6 shooting, but the duo were unable to lead Trikala (2-2) to victory as they fell to a 73-76 defeat at home. Meanwhile, Devon van Oostrum dished out eight assists and had six points to help Arkadikos (1-3) to their first win in the A1 league.

Experienced guard Ogo Adegboye is still producing the goods in the Italy’s Serie A after contributing 12 points and five assists to an 80-93 win on the road for Vanoli Cremona (2-3). In Serie A2, Ashley Hamilton missed his side’s 90-75 defeat, while Will Saunders netted 13 points in 16 minutes including 3-of-5 from deep as Novipiu Casale (4-1) claimed a 72-63 victory.

GB forward Myles Hesson struggled to find his range after going 2-of-12 from the field, though he did manage seven points and eight boards as Dijon (4-2) dropped in the Pro-A standings in France following a slender 69-67 loss. In NM1, Eric Boateng helped Blois (6-1) go joint top after posting 11 points and nine rebounds in a 70-60 road victory.

In Spain’s ACB, Dan Clark went up against his former team, but was limited to 10 minutes of court-time as Andorra (1-3) were beaten 78-72 at home to Fuenlabrada. Andrew Lawrence was tested against the best and had four points and four assists in 16 minutes with Gipuzkoa (0-4) comfortably beaten 97-61 by Euroleague giants, Barcelona. Ben Mockford scored 12 points in LEB Gold action, but was unable to lead Caceres (3-2) to victory as they dropped to sixth in the second division standings.

Gabe Olaseni hit double figures in Germany’s BBL as he scored 10 points and added four rebounds in a 93-83 win for Brose Baskets (4-1) as they climbed to fifth. The rookie forward – out of Iowa – also featured in his side’s 83-77 defeat on the road at CSKA Moscow in Euroleague action in midweek. Joel Freeland remains sidelined with an injury for the Russian side.

Nigel van Oostrum narrowly missed out on a double-double in the Netherlands after an all-round display consisting of 12 points, nine rebounds, and five assists. His team-mate, and fellow Brit, Ali Fraser had eight points and six boards in the same game, but Leeuwarden (1-3) were beaten 56-74 at home. In Slovenia, Jules Dang Akodo finished with five points, three assists and three steals in a 77-79 road victory for LTH Castings (2-0).

GB rookie Chris Caird produced an all-round display in Iceland after recording 12 points, eight rebounds, four assists and two steals in a 94-75 defeat for FSU (0-4) as his side still await their first league win. In Slovakia, Shore Adenekan saw extended minutes for Iskra Svit (2-7) at the weekend as he scored five points and collected seven rebounds in a 59-87 home defeat. Orlan Jackman scored 11 points in a slender 68-70 loss for CAB Madeira in Portugal.

Check back every Tuesday for our latest Brits Abroad recap!