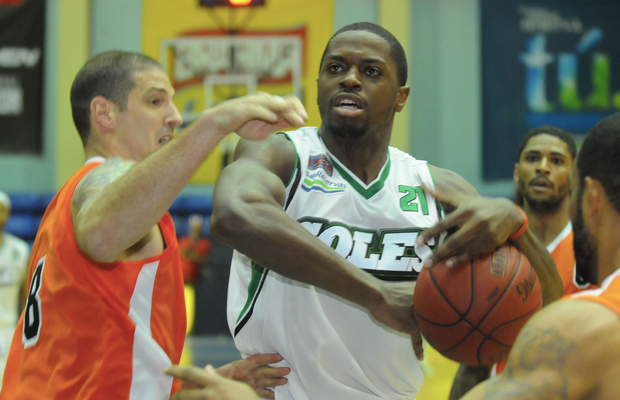 Matthew Bryan-Amaning and Club Soles began the defence of their LNBP Championship in Mexico with back-to-back victories to start the season. MBA had 21 points in a season-opening 79-51 win, before dropping 27 on 12-15 shooting in a following 90-69 triumph. Aaron Geramipoor has also made a strong start, collected 15 rebounds to go with nine points in the first game before posting a double-double of 15 points and 10 boards.

Andrew Lawrence scored eight points, including a perfect 6-of-6 from the free throw line as Gipuzkoa (0-3) fell to another loss in Liga Endesa action – falling to a 63-75 home defeat. Dan Clark played 14 minutes as Andorra (1-2) suffered a narrow 74-77 defeat at home with the GB forward scoring five points.

Ben Mockford helped Caceres (3-1) to a 101-93 overtime victory in LEB Gold action after shooting 5-of-8 from 3-point range on his way to a 19-point haul. In LEB Silver action, Mo Soluade netted three triples in a 13-point display and provided three assists as Clinicas Rincon (2-2) claimed a 59-55 win at the weekend.

Myles Hesson top scored with 14 points and added four rebounds to help Dijon (4-1) join four other teams at the top of the Pro-A standings in France. In NM1, Eric Boateng had five points and six boards in a convincing 94-53 victory for Blois.

Rookie Gabe Olaseni added two points and three rebounds off the bench in an 89-76 win for Brose Baskets (4-1) as they moved into the top four of the German BBL. Elsewhere, in Italy, Ogo Adegboye scored seven points in 15 minutes as Vanoli Cremona (1-3) fell to a 73-51 loss in Serie A. Ashley Hamilton had 14 points for Bawer Matera (1-3) in a 76-82 Serie A2 defeat, while Will Saunders scored six and had eight boards in a 69-51 win for Novipiu Casale (3-1)

Out in Portugal, Duke-Jermaine Forbes and Orlan Jackman are teaming up at CAB Madeira (3-1) as they helped their side claim a 69-81 road win in the top-flight at the weekend. Forbes went 3-5 from the field in a nine-point display, while Jackman added six points in his first game with his new team after two years in Germany.

GB U20 forward Jordan Williams made his debut for Oostkamp at the weekend, having signed a short-term deal with the Belgian club, and scored 11 points in a 72-65 win in the second division – with Jasper Chiwuzie in opposition for Ieper.

Jules Dang Akodo – who competed at the U20 European Championships this summer – impressed in his first game with LTH Castings in the Telemach League in Slovenia, throwing down a dunk on the fast break and dishing out 10 assists to go with nine points in an opening 88-75 win for his new side.

Liam Potter had six points and seven rebounds in 15 minutes as Svendborg (3-2) suffered a 78-83 home defeat in the Danish top-flight. Shore Adenekan played limited minutes in a 92-71 win for Iskra Svit (2-4), in Slovakia. In the Netherlands, Ali Fraser made his debut for Leeuwarden (1-2) with four points and four rebounds in an 86-82 overtime victory, while Nigel van Oostrum dished out eight assists and grabbed four steals in the win.