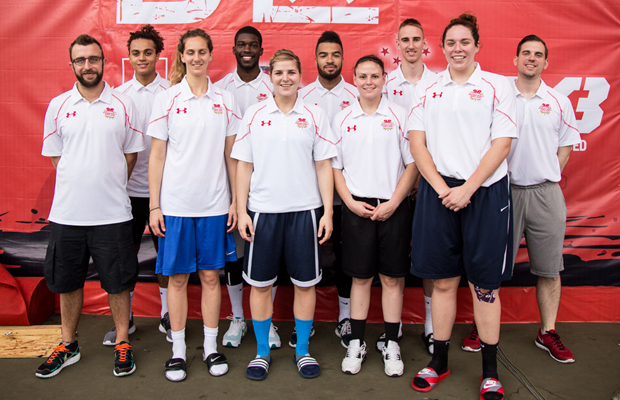 Basketball England’s FISU (International University Sports Federation) World 3×3 Championship teams returned to the UK this week following a strong showing in the tournament, with Northumbria reaching the semi-finals and Loughbrough the quarter finals.

Loughborough University Women and Northumbria University Men took part in the three day event in Xiamen, China, which was the launch of a new approach from FISU to global University sport.

Consisting of university teams from 11 countries, the event was hosted by FISU and FIBA 3×3 to promote elite competition, clean sport and broaden the horizons of the students involved to develop good global citizens through sport.

Northumbria’s lead Anthony Dawson was proud of the teams’ performances and how much they got out of the trip.

“The games themselves were extremely physically demanding and we came up against some very talented teams,” he said.

“The guys did a great job of competing, often against much bigger and stronger players and at times we played some fantastic basketball.

“The event has been such a wonderful experience and the hospitality shown to us by the organisers and volunteers couldn’t have been better. This is certainly something that none of us will ever forget.”

Loughborough University represented Basketball England on the Women’s side, starting the competition very well with opening wins over ETH Zurich and University of Bordeaux before an injury meant the team continued in the competition with just three players.

The two opening victories meant Loughborough progressed to face TUFE from Chinese Taipei in the quarter final but could not overcome the eventual winners of the tournament, losing by just three points, despite a hard fought effort.

Loughborough University Head Coach Matthew Harber was pleased with the team’s performance and enjoyed the overall event in China.

“It’s a real honour to be at the tournament representing both Loughborough University and Basketball England,” he said.

“This tournament gave us the opportunity to meet other players and coaches from around the world, which has given us a better insight into the ways other people work in high performance sport within a University setting.”

Great Britain’s Georgia Jones was with the Loughborough side in China, representing the country for her 13th year and grateful for the opportunity to do so again while embracing the culture in China.

“The tournament has been such a great experience,” she commented. “We played some really talented players from a number of different universities and I was really impressed with the level of competition we faced. The only two games we lost were were against the two finalists teams so that gives a good indication of how well we competed.

“Off the court we were able to visit a number of different places including the Putuo temple and learn about Chinese history and culture. Overall it has been a really great and fun experience. It felt amazing to be on a world stage competing for loughborough and representing England and I am so grateful for the opportunity.”

Northumbria University return to BUCS action taking on Worcester University this week before rejoining their Team Northumbria NBL Division One side whilst Loughborough have one more week to wait before starting BUCS and will build towards the opening of the WBBL this weekend in Loughborough.