Around the NBL - Week 4 - Hoopsfix.com 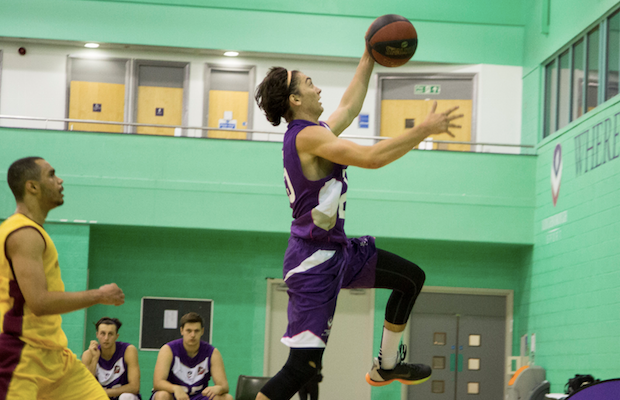 Check out our latest round-up of all of the action that took place in the NBL last weekend.

National Trophy action saw Lancashire Spinners maintain their unbeaten start in the North Group after recording their fourth straight win by beating Leicester Warriors 78-65. Epitomising their team effort with a balanced scoring effort, Mike Bernard top scored as the only player in double figures with 14 points.

Defending champions Manchester Magic made it three straight wins after they defeated Derby Trailblazers 75-67 despite a 29-point haul from Dan Watts. Former Derby centre Lee Goldsbrough led Magic with 15 points as they improved to a 3-1 record. Team Northumbria ended the unbeaten start of Bradford Dragons with a 90-83 road victory as a combined 52 points from Nick Moore and Jason Swaine were not enough for the hosts.

On Friday night, Reading Rockets claimed a dramatic victory in the National Trophy South Group as they defeated Essex Leopards 90-82 away from home, but needed double-overtime to do so. D’Montre Edwards continued his strong start with 28 points for the Rockets; supported by a further 17 from dependable captain Danny Carter. The Leopards were led by 20 points apiece from Albert Margai, Will Ashby and Ladi Brown. They almost secured a win in regulation before Dave Ajumobi nailed a tough turnaround three at the buzzer to force the first extra period against his former side.

Hemel Storm picked up their first win in the South after seeing off the challenge of London Lituanica 88-75 behind 22 points apiece from Bode Adeluola and new signing Nikolas Rhodes. Westminster Warriors joined Reading at the top on a 3-0 record after easing their way to a 90-55 win away at Kent Crusaders with Abraham Ekpuruoh finishing with a game-high of 20 points.

The majority of the Second Round in the National Cup took place on Sunday as 10 sides from Division 1 found a way to progress in the competition.

David Watts led Derby Trailblazers to a comfortable 92-39 win at home to NBDL side Coventry Tornadoes as he poured in 27 points. The home side rubber-stamped their dominance with a 33-3 final quarter. Lancashire Spinners survived a high-scoring encounter against D2’s Liverpool as they recorded a 102-94 win to advance. Jack Hudson had a game-high 30 points in the loss for the visitors with the Spinners led by Mark Rangeley’s 21-point haul.

Kent Crusaders needed to come from behind to beat London Greenhouse Pioneers 70-69 and advance to the last 16 while Leicester Warriors edged past Newcastle Under Lyme College Knights 85-80 on the road despite 32 points from Kieran Jones. Reading Rockets were more convincing against lower-league opposition as they powered past Greenwich Titans with a 98-67 victory behind 55 combined points from Danny Carter (30) and D’Montre Edwards (25).

Lewis Champion’s 25 points led Team Northumbria to an 85-81 win at D1 rivals Tees Valley Mohawks while defending champions Manchester Magic overcame Bradford Dragons with a 98-81 triumph in the other top-flight clash in the Cup with Alvaro Alarcon-Lizaur top scoring with 20 points.

London Lituanica crushed Brentwood Fire 105-66 while Hemel Storm picked up a 96-70 win at Ipswich with Bode Adeluola leading the way with a game-high 20 points. Elsewhere, Anthony Okereafor finished with 28 points to lead East London All Stars to an 82-56 win over Eastside Eagles and Loughborough Student Riders claimed a 100-point victory as they dominated TCAT Shropshire Warriors 136-36 after a 45-11 start.

Plymouth Raiders II defeated Bristol Academy Flyers II 61-47 in a low-scoring contest and Nottingham Hoods pulled out a narrow 73-72 win at Derbyshire Arrows despite 35 points from Joseph Baugh. The final D1 side to progress were Westminster Warriors as they eased to a 110-65 win away at Dagenham Dragons.

In the Patrons Cup on Saturday, East London All Stars came from behind to defeat London Greenhouse Pioneers 84-75, in Pool 1, thanks to a 26-12 final quarter.  In Pool 2, Nottingham Hoods avenged an earlier defeat to Ipswich in the competition as Alvaro Guerra-Urbistondo scored 25 points in the 79-61 road win.

Liverpool made it two wins from two in Pool 3 after they recorded a 91-82 win over Derbyshire Arrows, despite 34 points from American guard Alex Burt – the hosts were led by Chris Bigley’s 21 points. The final game saw Solent Kestrels go 3-0 in Pool 4 following a convincing 85-52 victory at home to Brixton Topcats.

Team Newcastle University Knights (2-0) made it two wins from two in Division 3 North action after recording a convincing 105-74 win on the road at Newcastle Under Lyme College Knights. American guard Robbie Lemons – out of NCAA D1 school Stanford – dropped 34 points in the win, while Tayo Oyefusi added 21 on his return to the club having left D1 side Lancashire Spinners. Ian Hewitt’s side have now won 22 consecutive league games.

Another promoted side, Doncaster Danum Eagles (1-0) won their opening league game after seeing off Team Birmingham (0-1) 66-51 with Matthew Martin top scoring with 20 points. Myerscough College (1-0) were rampant in a 95-72 win on the road at Mansfield Giants (0-1) despite a combined 46 points from deadly duo Calvin Morant-Hudson and Mike Buffalo. Sefton Stars (1-0) collected their first win after beating Leeds Force Academy (0-1) 72-62 away from home.

In Division 3 South, Barking & Dagenham Thunder (1-0) were victorious in their first game in the league, having earned promotion last season, as they beat Barking Abbey Crusaders (0-1) 72-67 on the road. Thames Valley Cavaliers (1-0) set down a marker with a crushing 100-50 win away at Plymouth Raiders II (0-1) while Middlesex LTBC (1-0) also won on their travels with a 70-62 triumph at Brunel Ducks (0-1) despite 23 points from Benji Lawmann.

London United (1-0) held off a spirited challenge from Oxford Brookes University (0-1) in an 85-82 victory with the visitors led by 62 points from Lorenzo Monticello (33) and Abdoulaye Sylla (29). On Sunday, Loughborough Student Riders II (1-0) defeated Northants Taurus 89-81 to pick up their first league win after finishing the game with a 9-0 run to snatch victory. Jack England had 25 points to lead the home side.

The Development League (NBDL) regular season continued at the weekend with all the fixtures taking place from the South-West group. Bristol Academy Flyers II (2-0) followed up their opening victory last weekend with another home success as they defeated Birmingham Mets II (0-1) 73-41. Swindon Shock (1-0) made a strong start on their way to a 78-53 win over Oxford City (0-1) while Cardiff Met Archers (1-1) completed a 90-74 win at home to Shropshire Warriors (0-1).

There was also one National Shield fixture, which saw Folkestone Saints advance with a 59-55 win away at Kent Crusaders II.

Check back each week for the full low-down on all of the action across the NBL!