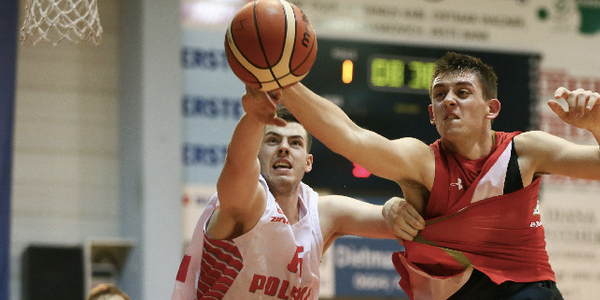 England under-18’s bounced back from their opening defeat at the European Championships with a crushing 70-49 victory against Albania, on Friday.

Karl Brown’s side improve to a 1-1 record in Group A after a strong first half performance set the tone for their first win in Austria.

Aidan Gastaldi-Davies top scored with 11 points and was joined in double figures by Kyle Carey and Alex Roberts, who both added 10 points apiece.

England set the tone by racing out of the blocks with four points from Henri Langton (pictured) in a 9-2 start, capped by a 3-pointer from Gastaldi-Davies.

Two more triples from Danny Evans and Roberts followed in a run of 11 unanswered points to put England in firm control with a 22-10 advantage after the opening quarter.

Roberts netted again from downtown in the second but it was met with a 7-0 response from Albania.

Carl Wheatle joined in on the 3-point barrage to spark a commanding 15-2 close to the half to help England take a 40-19 cushion into the break.

There was no let up in the second half as England held their opponents to just a single basket in the opening five minutes as they added another 13 points to their growing tally.

England remained in complete control and headed into the final quarter leading 59-30.

With the game virtually already wrapped up, it was a chance to rest the starters in the fourth as the bench was given an extended run out.

Albania claimed the final quarter 19-11 but the damage had already been done and two free throws late on from Andre Arissol took England up to 70 points as they rounded out a convincing 31-point win.

England made eight 3-pointers albeit from 36 attempts and finished with 15 steals; converting 18 points off of 19 turnovers from their opponents.

England return to action again tomorrow for their third game when they take on Bulgaria at 5pm (UK time).