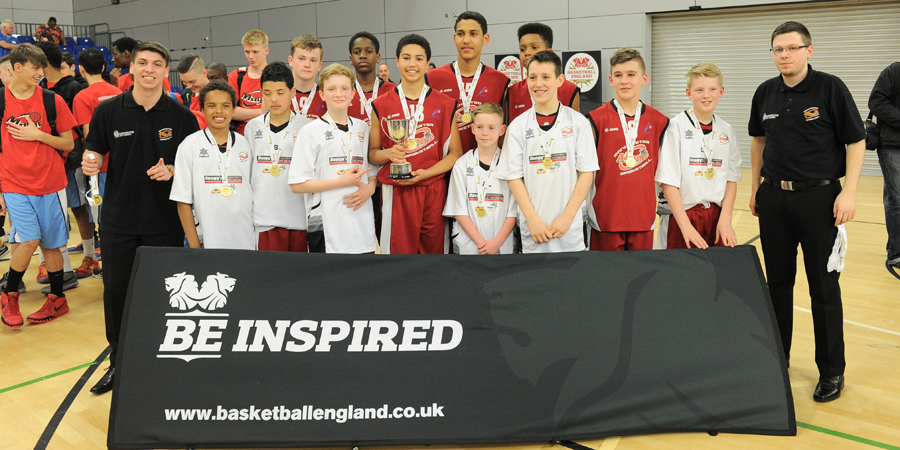 Manchester Magic asserted their dominance over Under-13 junior basketball this season as they claimed the title with a 99-97 win over London Feltham Warriors in the final on Saturday at the EIS Sheffield.

Manchester survived a missed shot from Feltham’s Bailey in the last 10 seconds, as Josh Grant grabbed his 23rd rebound of the game to seal with win and title for Manchester.

It was by far Magic’s closest game of the season, as they cruised through the regular season with a 20-0 record (winning by an average of almost 75 points), while their closest game in the playoffs was a 21 point victory over Worthing.

Grant led Manchester with 32 points, 23 rebounds, 2 assists, 6 steals and 1 blocked shot, while Will Marston added 30 points of his own.

“It’s a great achievement for the boys, as it is their first championship title, and also to remain unbeaten for the whole year,” said Manchester Head Coach Gary Williams.

“Credit to the Warriors, they pushed us all the way and made us work for the win. The squad this year have grown as team mates off the floor, and that has helped them massively on the floor. It’s a nice to be able to help the players to take this first stepping stone in the Manchester programme, and I hope each player develops and improves ready to emulate this seasons success next year.”

It was a rare occasion that a player from the runners up was awarded MVP, with Warriors’ Daniel Akinjisola getting the nod, following a 45 point, 22 rebound outburst that saw him finish with an efficiency rating of 55.

It was London Feltham Warriors’ second final loss in reason years, also suffering an U13 Championship final defeat in 2013 to NASSA.

It is the first time a new side has won the U13 title in four years, after NASSA secured a three-peat in 2014.