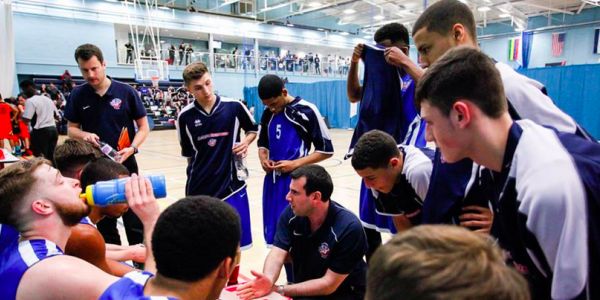 With the opening round of the playoffs all done, we look ahead to the Elite Eight match-ups taking place on Wednesday

Arguably the most anticipated round up of the Elite Eight, number one North seed Myerscough will face off against fourth seed from the South, Barking Abbey.

“Hopefully the game will be a huge showcase for the EABL,” Myerscough Head Coach Neal Hopkins.

“We know we will be up against it but I am confident my guys can push Barking all the way – we worked hard to earn the number 1 seed we are not going to give it up easily.”

Barking Abbey got an eight point victory over Hackney, after a late comeback saw HCC close the gap. With the return of their Senior Men’s Division 1 players, Josh Steel led BA with 22 points, while Nathan Smith had 14 and Akwasi Yeboah 10.

The two teams have never met before in any competition.

“We expect the game to be extremely difficult,” BA Head Coach Lloyd Gardner said, looking ahead to Wednesday.

“They have great pedigree, having won the North Conference, and we’ve seen how well they’ve done in the AOC Cup Final Four as well, we’re aware of how much of a challenge this will be on the road but at the same time we’re looking forward to the game. Myerscough are pretty deep, they have multiple players at each position and are well coached as well. They’re a quality programme and hopefully it will be a great game.”

“We are going to do our homework ahead of the Elite Eight match-up,” stated Preston Head Coach Malcom Leak.

“I know that they got a guard in Sam Newman who is explosive and scores at will so we are going to go back to the drawing board and work on our defensive assignments.”

“Looking at the game tape we’ve studied and from coaches we’ve spoken to, they’re a very big, physical, aggressive and athletic team, with Kyle Carey who’s been filling it up all year, Cameron King, and Melkisedek Moreaux, to give ourselves a chance on the road we’ve got to keep them off the glass and try to dictate the tempo.”

Number one seed in the South, SGS College, had no trouble dispatching of their first round match up, EHWLC (98-63), to face off against fourth seed from the North, Milton Keynes College.

“It was a good performance for our team and now we are one step away from reaching the EABL final four for the third consecutive year which is one of the main goals we set for our team at the start of the season,” SGS College’s Tamas Okros said after their win last Wednesday.

“We got to take it one game at a time. MK are a tough opponent and we will need to put together a strong performance against them.”

“Milton Keynes are a well coached organised side and we will need to put together a very solid team performance. We have ahead of us the opportunity to make a third consecutive EABL final four which shows the consistency and quality of our programme. We had to deal with some injuries but hopefully we can have everyone on time for the game this Wednesday.”

Second seeded Itchen College from the South will take on third seed Charnwood College in their Elite Eight match up, in what both teams will hope to be a competitive encounter after cruising in their playoff openers last week.

Itchen dominated, getting past Canterbury 74-38, while Charnwood blew out Loreto 105-67

“I was really pleased with our defensive effort today,” he said after their Sweet 16 win, where leading scorer Josh McSwiggan had 26 points, 7 above his season average of 19.3ppg.

“We will be required to play defence at a similar level next week if we want to defeat a very good Itchen team.”

“Charwood are a very talented team who can hurt you in a number of different ways, they have versatile scorers in Josh Mcswiggan and Hafeez Abdul which allow them to exploit mismatches, it will be a big challenge for us defensively,” Itchen Head Coach Matt Guymon said.

“With so much on the line I am expecting a tough, physical game that should be a great advertisement for elite junior basketball in this country.”

The game will be the only Elite Eight match up to take place on Friday.