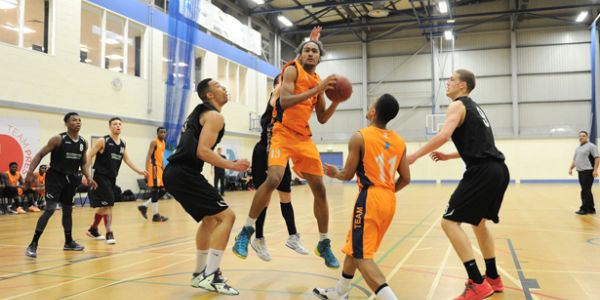 The opening round of the 2014-15 EABL playoffs, the Sweet 16, was completed last week, with the Elite 8 now set in stone. Read on to find out what happened.

Myerscough had 7 players in double digit scoring as they made light work of the number 8 seed Moulton College on Wednesday afternoon to progress to the next round of the play-offs with a 107 – 44 victory.

It took the visitors 8 minutes to register their first score as Myerscough raced out to lead by 25 during the first period. A shell shocked Moulton struggled to adjust to the high tempo of the home team and could only manage to put up 11 points at the half, as Myerscough cruised into the Elite Eight.

“The guys were tenacious in the first half, we lost our intensity as the game progressed but we had done the damage early – Moulton are a very honest team and play with great integrity, their attitude in a tough circumstance today was outstanding,” commented Myerscough Head Coach Neal Hopkins after the game.

7 players registered 10 or more points for Myerscough in a balanced offensive effort, Linas Bajorunas had 18 points 7 boards for the visitors with George Calvey adding 10 points 12 boards.

Preston College got a 71-57 over Allerton High School in the Sweet Sixteen round of the Elite Academy Basketball League (EABL) playoffs.

Cameron King (pictured) led the way for the home side as he just missed out on a triple-double with 15 points, 9 rebounds and 6 blocked shots. Moses Byekwaso also had 15 points and Kyle Carey chipped in with 12.

Leading scorer Cameron King, who finished the regular season as the second-best shot blocker in the country, was pleased with the win.

“I am happy that we won but we could have played and executed a little better,” he proclaimed. “We are going to go hard in practice and work on our defensive execution.”

Head Coach of Preston’s College Malcolm Leak was notably impressed with the defensive hustle the team showed in the fourth quarter which ultimately proved decisive.

“We played well and executed when it mattered,” he asserted. “Our defensive effort in the final quarter paid dividends and it was this that won us the game. We’re on a good run right now and as long as we continue working hard, playing as a team I think we can go a long way.” said Leak.

Third seed Charnwood College took a convincing 106-67 win over sixth seed Loreto in the first round of the EABL Playoffs.

Josh Mcswiggan had 26 points personal to lead Charnwood and set up a quarter final match-up with Itchen College next week.

“We will be required to play defence at a similar level next week if we want to defeat a very good Itchen team.”

Hafeez Abdul put in a strong performance to finish with 24 points and Tom Yome had 19 for the hosts. Hamad Ali led Loreto with 23 points. He was supported by Joe Swindells with 11 and Raheem Idris with 9.

Charnwood will make the trip south next Wednesday to take on the runners up in the South Conference Itchen College.

Milton Keynes College Trojans progressed to the Elite 8 of the EABL with a hard fought 71-66 over Derby College/Noel Baker School in Milton Keynes on Wednesday.

Jason Turner and Tom Kirkby led 4 Trojan players in double figures with 16 points and 15 rebounds and 11 points and 18 rebounds respectively .

Turner and Kirkby were supported by Max Denhams 11 points and 5 assists and Jerome Cross who came off of the bench to add 11 points 3 rebounds and 3 assists.

Milton Keynes move on to play SGS away next week in the Elite 8, while Derby battled hard but ended their season.

SGS College progressed to the Elite 8 of the EABL Playoffs with a convincing 98 to 63 win over Ealing, Hammersmith & West London College this past Wednesday afternoon at the SGS WISE campus.

Captain Tamas Okros led all scorers for SGS with 21 points and Dwayne Lautier-Ogunleye added 15. Okros was pleased with the result and was quick to think ahead to the next challenge:

“It was a good performance for our team and now we are one step away from reaching the EABL final four for the third consecutive year which is one of the main goals we set for our team at the start of the season,” said the GB U20s athlete.

“We got to take it one game at a time MK are a tough opponent and we will need to put together a strong performance against them.”

For the visitors Kevaun McKenzie had 19 points while Charles Yassi-Pepin added 15.

SGS College will now prepare for their Elite 8 EABL playoff match up on the 29th April versus Milton Keynes College.

Itchen College had a 78-34 win against Canterbury to advance to the Elite Eight on Wednesday afternoon at Itchen.

Itchen College had their best start of the season with a 16-0 run in the first quarter, with a balanced scoring attack and relentless defence the 1st quarter finished 20-4. The 2nd quarter followed on in similar fashion to the 1st with Itchen going on a 18-0 run to finish the half 45-12, by which point the deficit was too much for Canterbury to overturn.

“Our players were very disappointed with how we performed in the D3 National League Final and I felt they went out with a chip on their shoulder,” said Itchen Head Coach Matt Guymon.

“Canterbury are an excellent team, with a fantastic coaching staff, it was just one of those games where we played very well and on the other end shots were not dropping for them.

Itchen were lead by Charlie Coombes with 17 points, Elliot James with 12 and George Ivens with 12, as they face Charnwood in the next round.

For Canterbury James Lloyd was the only player in double figures with 14.

Copleston outlasted a quality Plymouth 81-75 to advance to the Elite 8 in the EABL, surviving multiple comebacks from the visitors and an outstanding individual performance from Ashley Hall, who connected on seven three-pointers, several at key moments, to keep the visitors in the game.

Plymouth set their stall out early, clearly intent on not letting Sam Newman give them another thirty-point quarter, denying the guard the ball wherever he was on the court, holding him to fourteen points for the game.

However, they had no answer for Luke Mascall-Wright who put together one of the performances of the season with a 34 point, 9 rebound, 5 assist, 4 steal stat line on 16-20 shooting from the field. However, it was far more than a one man show for Copleston as 17 year old Mark James went off for twelve points in the final period to bring home the game while the result was still in the balance.

Copleston were led by Mascall-Wright’s epic all round game which was supported by the ever developing Mark James who collected eighteen points to go with six rebounds. Sam Newman had a ‘quiet’ fourteen points, six rebounds and six assists. For Plymouth Ashley Hall had a big thirty points while Jose Malo was again big with twenty points and thirteen rebounds.

Ipswich lost Caleb Fuller to what looked to be a nasty groin injury in the second quarter and the 16 year old was clearly missed.

“I don’t think we were great today, but we were good and that was enough to get the win, but it won’t be next week,”said Copleston Head Coach Nick Drane.

“I thought Caleb was a major difference in the first quarter and we could have won by more had he been able to play in the final three quarters. Sam and Luke again led well and Mark, not for the first time came up big in the clutch. Luke’s adjusted his game this year to accommodate Sam’s scoring and this game shows how he can dominate a game in almost every way. Credit to Plymouth, they just don’t quit and I don’t think 6th place in the south does them justice – they are a tough match up”.

Defending champions Barking Abbey booked their place in the EABL Elite 8, with a 76-68 victory over Hackney Community College on Wednesday afternoon at BA Leisure Centre.

BA made it three wins from three against their East London rivals this season, as Josh Steel managed to shake off fatigue from his NBL Senior Division 1 Finals MVP performance this weekend to score 22 points to lead his side to victory.

“Today was a good win for us,” said BA Head Coach Lloyd Gardner.

“Anytime you beat a team with the transition ability and offensive rebounding that Hackney has, they can always make it a very dangerous game. We knew they were going to be a tough draw for us in the first round, so it was pleasing to get through. The guys have had a pretty brutal schedule these last couple of weeks, this has been a blessing and a curse, we’ve managed to get deep into the playoffs and win with the Kent Crusaders and then also we’ve had a number of college coaches in the last few days, which means guys have had to be performing at a high level for a long period of time and i think that showed in our legs a little bit today.

“Luckily for us, we’ve had the experience of the EABL through the season, so guys that have been carrying the team, players like Malik (Griffith-Johnson) and Diarmuid (O’Shea) – have had superb years with that group and they were able to come in and have big games for us, really help us out when we needed it, so that was good to see. I think our strength and depth paid off, so I’m very pleased to get the win against a tough team.”

Nathan Smith added 14 and Akwasi Yeboah 10, as the majority of the team played their third game in five days.

Arif Sempala and Johnathan Lashley led Hackney with 18 each, while Jonathan James added 16.

BA set up an Elite 8 match up with top seeded Myerscough College next week, which will no doubt be a competitive affair.