Kent Crusaders rounded off the season with yet another comeback victory after taking over in the second half to beat Manchester Magic 77-67 in the Division 1 playoff final.

Two England under-18 internationals led the revival with Josh Steel cementing his status amongst the elite players of his generation by earning the MVP award with 25 points on 6-11 shooting from downtown, while Akwasi Yeboah added 20 points and 7 rebounds.

It was somewhat of a redemption game for the 17-year-old after fouling out early in the semi-final win against Essex, and he came up big in the third quarter with a couple of big-time 3-pointers.

Dwayne Orija also stepped up; contributing 11 points, 6 rebounds and 7 assists in the win as Kent battled back from a 41-33 half-time deficit. 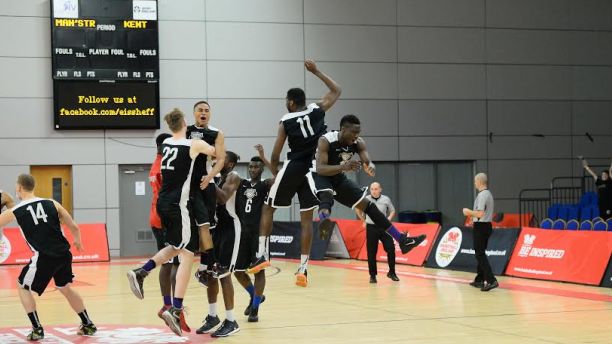 Magic were again without Ellis Cooper, a strong contender for league MVP, because of a visa issue, and they were led by Jack Minister’s 14 points.

Paul Middleton’s side made the better start and a 14-4 close to the opening quarter gave them an early 24-15 advantage.

The gap was as many as 13 points in the second when Minister netted a three, but Kent were able to whittle away at the deficit and went into the interval trailing by eight.

Magic briefly restored their double-digit lead before leading 47-39 at the midpoint in the third quarter. Just as they have done so many times previously, Kent began to fight back and took the lead on back-to-back triples from Yeboah in an 11-0 run.

Yeboah then landed two more scores from beyond the arc with Steel adding another as Kent opened up a commanding 62-50 lead early in the fourth.

Manchester were able to close within as many as 7 in the closing stages with a quick-fire 5-0 run, but Steel buried his sixth triple of the game with a minute left to put the game beyond doubt.

Arguably the outsiders heading into the Final Fours, Kent defeated the league champions as well as the National Cup & National Trophy winners in a remarkable weekend for the club.