Around the NBL – Week 22 Playoffs Recap 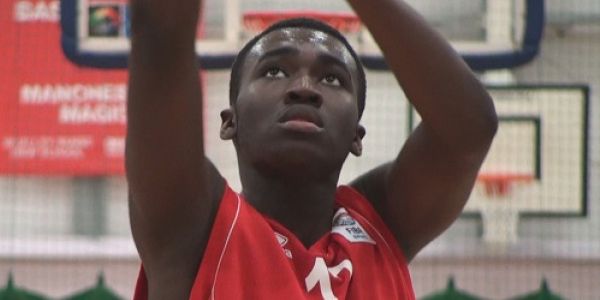 Check out our latest round-up of all the action across the four divisions of the NBL with the Final Fours set in D1.

The Final Fours have been confirmed after the top four seeds all came through their quarter-finals unscathed to advance to Sheffield this weekend.

Kent Crusaders were the first team to book their semi-final spot after coming from behind to deny Reading Rockets a third consecutive trip to the Final Fours with a 63-61 victory. The visitors compiled a 17-0 run in third quarter to take a 55-43 lead into the fourth, only to see the Crusaders complete yet another turnaround. A 20-6 final quarter effort was enough to secure the win, with England under-18 internationals Akwasi Yeboah (pictured) and Josh Steel playing major roles with 19 and 12 points respectively.

“I was delighted with our effort today,” said Kent Head Coach Lloyd Gardner. “We faced a lot of adversity and battled through foul trouble in the first half. All year we’ve managed to come back from deficits, the team has great character and it was shown once again today.

“Reading are such a well coached team, such a deep team, with a lot of good players so it was a very difficult game for us. It’s a shame that the game couldn’t have been at the Final Four as both teams really showed some quality basketball for people to watch.”

The league champions, Essex Leopards, set up a clash with Kent after they recorded an 82-76 win over Bradford Dragons, on Sunday, as they reached the Final Fours for a fifth straight season. JP Davis led the visitors with 23 points – going 13/17 from the foul line – but his side were unable to hold on to their advantage heading into the final quarter, where they led 60-57. Dave Ajumobi top scored for the hosts with 22 points, while Byron Richards, Albert Margai and Will Ashby all hit double figures with 14, 13 and 12 points.

Manchester Magic continued their win streak as they powered their way to a 75-63 win at home to Team Northumbria as Ellis Cooper produced yet another dominant display with a monster 38 points and 13 rebounds as well as four steals. Damoy Robertson led the visitors with 24 points and nine rebounds, but Marc Steutel’s side were unable to recover from their opponents’ fast start, which saw Magic lead by 13 at the half.

“Ellis just finds a way to get the job done,” Magic Head Coach Paul Middleton told MEN. “He’s come in and been great this season. He listens, gets on great with everyone – then drops 38 in a game like this. He’s pretty humble about the whole thing too and was just what we wanted in bringing in an American.”

Second seeds Derby Trailblazers edged out Worthing Thunder with a 92-83 victory behind a 30-point haul from Chris Shalvoy. Raheem May-Thompson was handed a starting role and contributed a further 26 points as the home side took control in the middle periods. Thunder were led by Hank Rivers’ huge double-double of 23 points and 20 rebounds, while Louis Allen scored 21 and Milton Chavis flirted with a triple-double with 19 points, 11 rebounds and 7 assists.

The two promoted teams in D2 will once again battle it out for silverware, after winning their respective semi-finals.

Lancashire Spinners ran out convincing 95-78 winners against Ipswich in the opening semi-final with 23 points, 6 rebounds and 7 assists coming from Steven Gayle. Four starters hit double figures for the home side as they raced out of the blocks with a 15-2 start to seize control. The visitors made the scoreline more respectable with a stronger fourth quarter having trailed by as many as 28 points at one stage. Ipswich are losing starting duo Sam Newman, who finished with 17 points and 10 rebounds, and Luke Mascall-Wright as they look set to head to play college basketball in the US, and the club have already begun their search for replacements ahead of next season.

The second semi-final saw the D2 champions, London Lituanica see off the spirited challenge of Loughborough Student Riders with a 90-79 success, on Sunday. After a strong start from the home side, Loughborough battled back and hauled themselves into contention by closing to within three by the end of the third. However, London Lituanica closed the game out with a 23-15 final quarter.

The D3 North and South winners will meet in this weekend’s final after recording contrasting wins in the semi-finals.

Solent Kestrels narrowly defeated division rivals, Plymouth Raiders II, 69-67 after captain Louie Kirkman led the way with a game-high 27 points. A 3-pointer in the final minute gave the visitors their first lead of the game, although it was short-lived as Spencer Wells, who hit 16 points, netted on the next possession to restore the home side’s advantage, before Kirkman then made 1/2 from the line to seal the win.

Liverpool will be their opponents in the final after they had a rather more straight forward semi-final win as they beat Thames Valley Cavaliers 86-58. The North division winners made a strong start and never looked back as they advance to their second final of the season, having been beaten in the National Shield Final in February.

Oxford Brookes University now have just one final team standing in their way of completing an undefeated season in D4. The South-West winners went 18-0 during the regular season and ended the hopes of Doncaster Danum Eagles with a resounding 109-80 victory in the semi-final having racked up 62 in the first half.

College of West Anglia Fury await in the final, which will kick off the Final Fours weekend after they beat Barking & Dagenham Thunder 64-62 on the road, in overtime. Fury finished third behind their Thunder in the East Midlands division, but continued their post-season run having forced the extra period with the game tied at 57 at the end of regulation.

What are your predictions? Leave your thoughts in the comments below!