Mo Soluade (’95) Has Career Night in the Euroleague 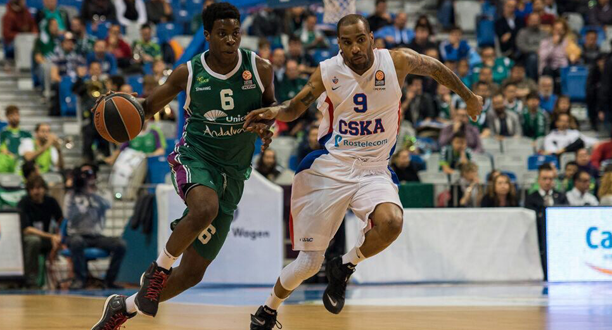 Mo Soluade had a career night in the Euroleague on Thursday as Unicaja Malaga suffered a 99-75 loss at the hands of CSKA Moscow.

The 1995 born talent saw just short of 19 minutes in the game (career-high), scoring a career-high 8 points including a buzzer beating three at the end of the first period (video below), adding 1 rebound and a career-high 3 steals while going 3/7 from the field.


During and after the game he received plaudits on Twitter for his performance.

Unicaja dropped to 2-9 after its fourth official loss against CSKA this season and is all but mathematically out of chances to advance in the competition.

The 19 year Soluade, who will no doubt be involved with the GB U20s this summer providing he is available, took to Twitter after the game to post a photo with him and CSKA point guard Milos Teodosic.

After that performance I couldn't leave without a picture with Milos Teodosic! Also, Happy Birthday! pic.twitter.com/pd5Bzi0JVp

Soluade also had a solid outing against CSKA in November, as he scored 5 points in just 8 minutes but suffered a 95-85 defeat.