EABL Sweet 16 Round Up - Hoopsfix.com

EABL Sweet 16 Round Up 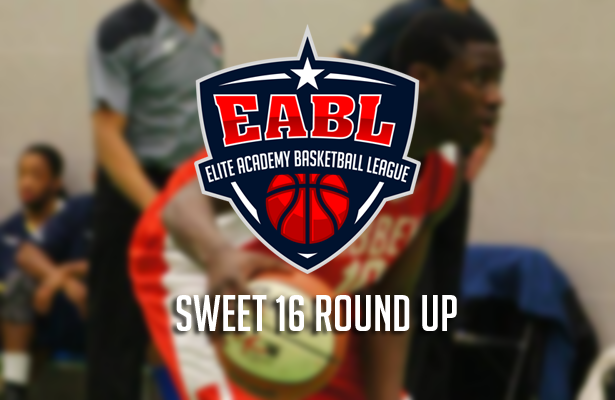 The opening round of the 2013-14 EABL playoffs, the Sweet 16, was completed last week, with the Elite 8 now set in stone. Read on to find out what happened.

Top seed Loreto got a 79-69 victory over Gateway College, taking their winning streak to six games as they will now look to the Elite Eight.

EABL newcomers Myerscough College continued their successful first season in the EABL with a 72-65 win over Derby College/Noel Baker School.

Trevor Samuels had 20 points and 7 rebounds, Emmanuel Kabengele had a 16 point, 13 rebound double double and Andre Gayle finished with 14 points, 8 rebounds and 5 assists to see Myerscough past Derby.

“Derby made life really tough – full credit to them for pushing us all the way, the competition at this stage is going to be hard and it’s great to be in a position to play other top teams,” said Myerscough Head Coach Neal Hopkins.

“With the elite 8 spot secured we have a lot of work to do, I think we can rise to the challenge.”

Myerscough overcame 24 points from Derby’s Jake Wesselingh, and will now prepare for a match-up with the undefeated SGS College in the Elite Eight.

Charnwood College took victory in an overtime thriller, 74-81, over visiting side Preston College to advance to the Elite Eight.

Though they came up short at the end of regulation to avoid Overtime, Charnwood came through in the extra period, as a dagger three from Emmanuel Burton saw them through to the next round.

New led all scorers with 25 points, he also added 13 rebounds and 4 assists. Max Denham had a double double of 12 points and 12 assists and Lee Teivans finished with 10 points and 9 rebounds. Eddie Matthew led Tyne Met with 17 points while Horta Darrington added 16 respectively.

A dominant performance from Kavell Bigby-Williams saw defending champions Harris Academy Beckenham defeat Ealing, Hammersmith & West London College 79-59 to book their place in the next round.

Bigby-Williams had 29 points, 30 rebounds, 4 assists and 4 blocks, dominating the paint against the undersized EHWLC squad.

However, the final score was not a true reflection of just how close the game was. Led by Tyrell Isaacs’ 28 points, EHWLC kept it close for the first 3 and a half quarters, getting the lead down to just 8 with a little over 5 minutes remaining.

“It was a difficult game to win,” said Harris Head Coach Steve Bucknall. “We won it because we had superior size, but this is the issue with us. Why do we have to rely so much on our size; if we don’t come together as a team and everyone contributes then we’re going to struggle.

“It was a good game, we played hard, but we didn’t execute. They had a great player, Tyrell Isaacs, and Kevaun McKenzie, they were hitting shots, they made it difficult, but we were able to win because of our size. We’ve got to do better than that.”

Harris will face Charnwood in the Elite Eight.

Barking Abbey secured their place in the EABL Elite Eight with an 88-63 win over The Harefield Academy.

BA stretched their lead to twenty points with six minutes left in the first half and never looked back.

Karolis Kundrotas led BA with a 22 point, 11 rebound double double on 9/11 shooting, while Daniel Ogunseye added 20 on 7/11 as BA shot over 50% from the floor and at times, put on a passing clinic on their way to 23 assists.

“It was a great way to start the playoffs,” said BA Head Coach Frank Holloway. “I thought we moved the ball well and did a decent job rebounding too. All in all, it was a great win for BA and now we will begin preparation for the second round.

BA will match-up with Loreto College n the Elite Eight.

Itchen College are another first year EABL team to book their place in the second round with a68-53 win over Copleston High School.

Riding the highest scoring duo in the EABL, Luke Mascall-Wright and Sam Newman who finished with 20 points each, Copleston kept the game close for the majority of the game, but a final five minute burst from Itchen saw them extend the lead to nineteen and pull off the victory.

“We knew we had to defend the paint very well today and lock in to their 3 main scorers,” said Itchen Head Coach Matt Guymon after the game. “I thought it was one of our best defensive performances of the season.”

Itchen will face Milton Keynes College in the Elite Eight.

SGS College progressed to the Elite 8 with a 72-59 win over Oakland, keeping their perfect record intact in the process.

The Bristol side opened the game with a 10-0 run which Oaklands was never able to recover from as SGS went to the interval break with an 18 point lead, 42 to 24. SGS extended their lead further in the 3rd quarter 68 to 40 but a 20-4 4th quarter period by Oaklands brought the final difference to 13.

For SGS, Tamas Okros led all scorers with 20 points and 10 rebounds while Dwayne Lautier-Ogunleye added 18. For Oaklands Daniels had 10 points and Gastaldi-Davies added 8.

“We came out strong and took control of the game early in the 1st quarter by producing a very strong defensive performance. We played well as a team for three quarters however our 4th quarter allowed Oaklands to reduce the lead,” SGS Captain Jack Griffiths said after the game.

SGS will face Myerscough in the Elite 8.

The Final Fours will be taking this coming weekend, Friday 9th and Saturday 10th May at UEL Sports Dock – read more here and join the Facebook event here. Entry is entirely FREE!